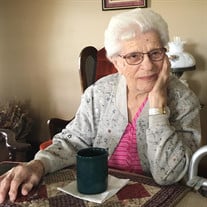 Anna Florene Williams, 101, of Havana, entered her heavenly eternal home on Sunday January 17, 2021 at the Riverview Estates in Havana. She was born on January 14, 1920 in Bath, Illinois, the daughter of Frank and Dolly (Miller) Holmes. She married Ross LeMasters on December 4th, 1933, he proceeded her in death in 1961. She later married Estel Williams March 1st, 1962. He proceeded her in death in 1997. She was also preceded in death by her parents, 11 brothers and sisters. One brother, Larry Holmes, survives. Anna was a loving wife, mother, grandmother, great grandmother, great great grandmother and great great great grandmother,Sister and friend. Nannie, as she was affectionately known as by many, recently was introduced to her sixth-generation grandchild. She cherished spending time with her family and enjoyed visits from all her many friends and family. Nannie was always more concerned for everyone else’s welfare than she was of her own. Anna enjoyed cooking and hosting family gatherings, attending bluegrass festivals, fishing, hunting and traveling. Anna was a very special lady loved by many. Anna was a homemaker her entire life and worked on the farm where they raised livestock, fowl and hunting dogs. She loved to cook for her family and guests and prepared canned goods for many years. Anna is survived by one daughter Janice LeMasters(Dean) Henninger, one stepson Eldon (Sharon) Williams, five grandchildren, eight great grandchildren, thirteen great great grandchildren and one great great great grandchild. Grandson Charles Williams preceded in death. A graveside service was held on Wednesday January 20th, 2021 at Laurel Hill cemetery. Pastor Mike Henson; Havana Grace Baptist Church, conducted the service. In lieu of flowers, memorial contributions may be made to Anna Williams Memorial for the purchase of furniture for the residents at Riverview Estates. Hurley Funeral Home in Havana is assisting with final arrangements. Please visit hurleyfh.com to view her obituary, leave online condolences and share memories.

Anna Florene Williams, 101, of Havana, entered her heavenly eternal home on Sunday January 17, 2021 at the Riverview Estates in Havana. She was born on January 14, 1920 in Bath, Illinois, the daughter of Frank and Dolly (Miller) Holmes. She... View Obituary & Service Information

The family of Anna Florene Williams created this Life Tributes page to make it easy to share your memories.

Send flowers to the Williams family.