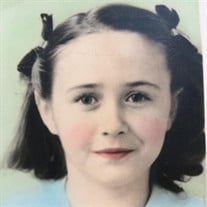 Barbara J. Estill, 89, of Springfield, IL passed away at St.John’s Hospital on Wednesday, January 27, 2021 at 10:23 PM. She was born on December 15, 1931 in Greenview, IL to Fred and Opal (Childers) Schurman. She married Robert Mills Estill on February 10, 1952 in Greenview, IL. He preceded her in death on November 4, 2008. Barbara is survived by one son, Robert Mark Estill; and one daughter, Tracy Jean Jackson; one granddaughter, Andrea (Lathan) Jones of Pleasant Plains; and two great grandsons, Judah and Jenner Jones. She was preceded in death by her parents, and two brothers, David and Ronald Schurman. Barbara was a fun person to be around. She had a great sense of humor, was witty, friendly, bubbly and fun. Barbara began sewing at the age of six. She always enjoyed quilting and belonged to various quilting guilds. She was an avid golfer, gardener, and was a volunteer at New Salem. She enjoyed the outdoors and even transformed her yard into a garden oasis. A graveside service will be held for Barbara on Tuesday, February 2, 2021 at Elmwood Cemetery in Greenview, IL at 1:00 PM. Pastor Joanne Hinds will officiate. Memorials may be made to the Illinois Presbyterian Home in Springfield, IL. Online condolences may be left for the family at www.hurleyfh.com Hurley Funeral Home in Petersburg, IL is assisting the family with arrangements.

The family of Barbara J. Estill created this Life Tributes page to make it easy to share your memories.

Send flowers to the Estill family.