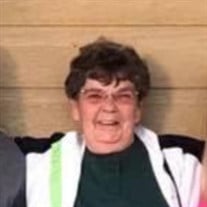 Betty L. Carter, 84, of Greenview, Illinois, formerly of Bullhead City, AZ passed away on Wednesday, January 5, 2022, at Sunny Acres Nursing Home in Petersburg. She was born February 8, 1937, in Mason County to Edward and Dorothy (Williams) Boston. She married Stanley Carter on July 30, 1955. He preceded her in death on March 12, 2017. Betty is survived by her sons, Tony (Annabelle Wood) Carter of Greenview, Tim (Ronda) Carter also of Greenview, Stanley Dale Carter of Chatham; three grandchildren, Jessica Carter, Brittany Jacobs, and McKinzie Carter Cordier; two great grandsons, Sullivan Lee Lorenze, Dillon Atkinson; and two brothers, Ron (Diane) Boston of AZ, and Buddy (Lorna) Boston of Greenview. She was preceded in death by her parents, her husband, and one daughter in law, Traci Carter. Betty graduated from Greenview in 1955 and lived in the area most of her life before moving to Arizona in 2004. Betty and her brother, Ron, owned and operated a trucking company that they started in 1972 and later sold in 2013. She was a Christian and member of the AMVETS Post 179 Auxiliary. She enjoyed bowling and gambling, especially in Laughlin, NV. A visitation will be held on Monday, January 10, 2022 from 10:00 AM to 11:00 AM at Hurley Funeral Home in Greenview. The funeral service will follow beginning at 11:00 AM also at the funeral home. Rev. Ken Gennicks will officiate. Burial will take place at Elmwood Cemetery in Greenview immediately following the service. Memorials may be made to the AMVETS post 179 or to the Athens Christian Church. Due to rising COVID cases, masks are requested to be worn at all times during services. Online condolences may be left for the family at www.hurleyfh.com Hurley Funeral Home in Greenview is assisting the family with arrangements.

The family of Betty L. Carter created this Life Tributes page to make it easy to share your memories.

Send flowers to the Carter family.