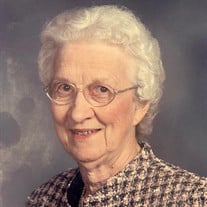 Charlotte Williams, 92, of Manito passed away at home on Wednesday, August 4, 2021. She was born on November 22, 1928 in Spring Lake Township to Charles and Rebecca (Beimfohr) McLaughlin. She married Francis Williams on June 26, 1949 in the Spring Lake Church in Manito. He preceded her in death on September 26, 2001. Also preceding her in death were her parents, brother, Harry Nelson McLaughlin, sister, Shirley Umholtz, and son, Gregory Williams. Surviving are two sons, Brian (Georgia) Williams of Wisconsin and Randy (Lori) Williams of Pekin, daughter-in-law, Mona Williams, seven grandchildren, Joshua, Aaron, Amy, Angela, Alyse, Kyleigh, and Chad, eleven great-grandchildren, and two step great-grandchildren. Charlotte graduated from Manito Community High School in 1946, where she received the DAR award in her senior year. She was an election judge and a long-time member of the Homemakers Extension of Tazewell County. She worked at the National Aluminum Manufacturing Company and Brown Supply Company in Peoria as a bookkeeper until she stayed home to raise her family. Charlotte was a member of the First Assembly of God Church in Pekin, where she taught Sunday school and was Sunday school secretary. She liked to garden, sew, read, and quilted with her mother and sister for many years. She enjoyed her family and being a homemaker. Funeral services will be held on Saturday, August 7, 2021 at 2:00 p.m. at Maas-Hurley Funeral Home in Manito. Burial will follow the service at Spring Lake Cemetery. Memorial donations may be made in Charlotte’s name to the donor’s choice of organization. Online condolences can be left for her family at www.hurleyfh.com. Maas-Hurley Funeral Home in Manito is in charge of arrangements.

Charlotte Williams, 92, of Manito passed away at home on Wednesday, August 4, 2021. She was born on November 22, 1928 in Spring Lake Township to Charles and Rebecca (Beimfohr) McLaughlin. She married Francis Williams on June 26, 1949 in the... View Obituary & Service Information

The family of Charlotte Williams created this Life Tributes page to make it easy to share your memories.

Charlotte Williams, 92, of Manito passed away at home on Wednesday,...

Send flowers to the Williams family.