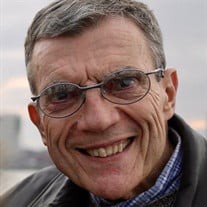 On February 26, 2022 David (Dave) Brister passed away in Petersburg, Illinois. At the age of 84. He succumbed after a twenty-year battle with Parkinson’s Disease which he fought with great strength and dignity. He is survived by his wife, Phyllis Brister, PhD, their daughter Kathriel Brister, MD (Salwan Almashat, MD), and grandsons Laith and Zane. David was born on January 11, 1938, in Cleveland, Ohio. That David had an adult life is nothing short of a miracle, at the age of eight, he was only the fifth patient in the United States to successfully undergo surgery to correct coarctation of the aorta (congenital narrowing of the aorta). He recovered fully and went on to earn his doctorate in Clinical Psychology at the University of Alabama, Tuscaloosa in 1971, where he met his wife, Phyllis. As a psychologist, David co-authored (with his wife Phyllis) The Vicious Circle Phenomenon: Our Battle for Self-Control, published in 1987. David also worked in private practice in both Pascagoula and Jackson, Mississippi. He was a professor at Jackson State University and the Universities Center in Jackson. His adventurous spirit later led him to Barrow, Alaska where he directed mental health services and was a public safety deputy at the North Slope Borough. He was also director of the Montclair Counseling Center in Birmingham, Alabama. For many years until his retirement, he was a psychological consultant for the Social Security Disability Determination Services in Birmingham, Alabama, and Springfield, Illinois. David was an inveterate optimist. He loved sports cars (his GTO Pontiac, Karmann-Ghia and Porsche), target shooting, his dogs (Daphne, Max and Dixie Rose), and most of all his family. No memorial service or funeral is planned. The family asks that in lieu of flowers, donations be sent in his memory to the American Parkinson Disease Association or the American Heart Association. Online condolences may be left for the family at www.hurleyfh.com Hurley Funeral Home in Petersburg, IL is assisting the family with arrangements.

On February 26, 2022 David (Dave) Brister passed away in Petersburg, Illinois. At the age of 84. He succumbed after a twenty-year battle with Parkinson&#8217;s Disease which he fought with great strength and dignity. He is survived by his wife,... View Obituary & Service Information

The family of David Michael Brister, PhD created this Life Tributes page to make it easy to share your memories.

Send flowers to the Brister, family.