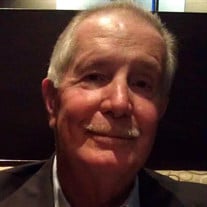 David Logan Payne, Jr., 83, of East Peoria (formerly of Easton), Illinois passed away at his home at 11:22 p.m. on Tuesday, January 12, 2021. He was born on June 9, 1937 in Lebanon, Kentucky to David L. and Geneva (Hartfield) Payne, Sr. He married Priscilla Rudolph on July 9, 1957 at the First Baptist Church in Havana, Illinois. David is survived by his wife, Priscilla, of East Peoria (formerly of Havana), Illinois; daughter, Diana (Brian) Hoffman; granddaughters, Bailey and Rebecca Thrasher; brother, Jerry (Sheryl) Payne; and many nieces and nephews. He was preceded in death by his parents; sisters, Sara Squires and Carol Tomasko; and half-brothers, John Payne and Forrest Payne. David proudly served in the US Navy submarine service, stationed in Key West, Florida. After his discharge from the Navy, he began working for Central Illinois Light Company. Over his 36 year career at CILCO, he worked in all of the power plants...first as an electrician, then a supervisor, and finally retiring as a project engineer overseeing the demolition of the R.S. Wallace Station in 1995. His family always came first in his life, and he was a devoted husband, father, and grandfather. He enjoyed going to Florida with his family every year, and spending time at the beach. He also loved spending time with his granddaughters and attending their activities. David's other hobbies included hunting, fishing, woodworking, crossword puzzles, and reading. Graveside services will be held on Monday, January 18, 2021 at 1:00 p.m. at Laurel Hill Cemetery in Havana, IL. Rev. Tim Lindsay will officiate. Memorial donations may be made in David’s name to the TAPS Animal Shelter in Pekin, IL or the First Baptist Church in Havana, IL. Online condolences can be left for his family at www.hurleyfh.com. Hurley Funeral Home in Havana is in charge of arrangements.

The family of David L. Payne Jr. created this Life Tributes page to make it easy to share your memories.

Send flowers to the Payne family.