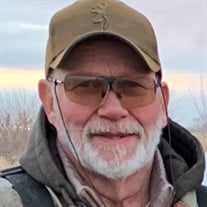 David L. Sennett, 71, of Havana died unexpectedly June 12, 2022, at a Peoria Hospital. He was born February 13, 1951, in Watseka, IL. He grew up on the family farm in Donovan, IL. His parents were Harold E. and Vida M. (Johnson) Sennett. Dave graduated from Donovan High School, Class of 1969 and immediately volunteered for service in the U.S. army. He became a paratrooper and served with the 173 rd Airborne Brigade for two tours in Vietnam. Upon returning to the States, the 173 rd was deactivated and he became part of the 101 st Airborne. There he became a member of a team that traveled the U.S. and performed repelling and jump demonstrations. In July of 1973, while performing for the 82 nd Airborne Association reunion in Hot Springs, AR, he met a young widow, Teresa Burgan, from Sweetwater, TX. They quickly became best friends and were married on November 27,1973 in Donovan. Dave worked as a machinist for UARCO in Watseka, IL and for Texas Utilities in Mt. Pleasant, TX. The family returned to Illinois where he worked as a welder for Illinois Power Company in Havana. He then joined the Boilermakers union and worked as a craft superintendent in various power plants. Supporting his family was his priority but hunting was his passion. When asked what he liked to hunt, he would reply, “anything that flies and has feathers.” He also loved to fish. Dave was a member of the VFW, American Legion, both the 173 rd and 101 st Airborne Associations, NRA, Delta Waterfowl, Honkers Corner Hunting and Fishing Club, and Fowl Manor Duck Club. In addition to his parents, he was predeceased by a brother, Jack. Surviving are his wife, Teresa, daughter, Sharon Froman of Pawnee, IL; son, Shane (Becky) Sennett, of Havana; seven grandchildren, Abigail Sennett, Adam Sennett, Sharesa Cleer, Shane (Felicia) Froman, Samantha Froman, Maxx Froman, and Luke Bowen; and four great-grandchildren; sister-in-law, Norma Sennett of Watseka; brother, George (Arlene) Sennett of Sheldon; and many nieces and nephews. Per his wishes there will be no public services or interment. There will be a private honor guard service at a later date. Those who wish to remember Dave in a special way may make donations in his name to a charity of their choice. Cremation and arrangements by Hurley Funeral Home in Havana.

David L. Sennett, 71, of Havana died unexpectedly June 12, 2022, at a Peoria Hospital. He was born February 13, 1951, in Watseka, IL. He grew up on the family farm in Donovan, IL. His parents were Harold E. and Vida M. (Johnson) Sennett. Dave... View Obituary & Service Information

The family of David L. Sennett created this Life Tributes page to make it easy to share your memories.

Send flowers to the Sennett family.