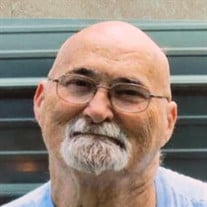 Delbert Ray Force, 72, of Chandlerville, passed away at his home at 6:00 p.m., on Friday, December 31, 2021. He was born May 13, 1949, in Beardstown, Illinois, to Robert and Joesphine (Briggs) Force. He married Alison Sue Marcy on October 12, 1967. She preceded him in death on October 25, 2014. He later married Lynne Beard on November 10, 2016, in Virginia, Illinois. She survives. Mr. Force is survived by his wife, Lynne, of Chandlerville; one son, Chuck (Holly) Force, of Chandlerville; as well as three grandchildren: Robert (Hanna) Ratliff, Tanner (Nicole) Force and Ellen Force; and five great-grandchildren: Liam, Lily, Livia, Luxley and McKenzie. He was preceded in death by his parents, wife Alison, and son Jon Robert Force. Mr. Force was a member of Mt. Olive Baptist Church, near Chandlerville. He worked for Oscar Mayer for twenty years, McLean Forge for twelve year, and Pactiv-Reynolds for fifteen years, before retirement in 2014. He enjoyed playing softball, golfing, playing cards and working jigsaw puzzles. He had also acted as a Boy Scout Troop Leader and little league baseball coach. Visitation will be held at Lintner-Hurley Funeral Home in Chandlerville, on Wednesday, January 5, 2021, from 9:00 until 10:30 a.m., with graveside services following the visitation at Mt. Olive Cemetery, near Chandlerville, at 11:00 a.m.. Rev. George Garnot, Jr. will officiate. Memorial contributions may be made to Mt. Olive Baptist Church or Cass-Schuyler Hospice. Online memorial messages may be left for the family at www.hurleyfh.com. Lintner-Hurley Funeral Home in Chandlerville is in charge of arrangements.

The family of Delbert Ray Force created this Life Tributes page to make it easy to share your memories.

Delbert Ray Force, 72, of Chandlerville, passed away at his home...

Send flowers to the Force family.