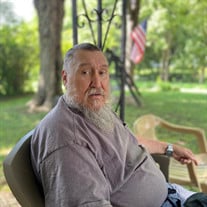 Dennis Russell Smith, 72, of Tallula, IL passed away at his home on Tuesday, October 12, 2021 at 10:36 AM. He was born on December 8, 1948 in Tallula, IL to Johnie and Rosie Mae (Kemp) Smith. He married Barbara Jo Snyder on April 7, 1984 at the United Pentecostal Church in Lincoln, IL. Dennis is survived by his wife, Barbara; two sons, Jeremiah (Rita) Duff of Edinburg, IL and Nathan (Rhonda) Duff of Austin, TX; his mother, Rosie; three grandchildren, Zachary Duff, Khloe Duff, Kaylee Duff; brothers, Bill Smith of Petersburg, Roger (Joyce) Smith of Jacksonville, Wayne (Jessie) Smith of Missouri; sister Darlene (Chuck) Dick of Petersburg; two sisters-in-law Mary (Wife of James) Smith of Springfield, Shirley (Wife of Harvey) Morgan; one brother-in-law Mike Maple; and several nieces, nephews, and cousins. He was preceded in death by his father, Johnie Smith; sister, Elizabeth Maple; brother, James Smith; half-brother, Harvey Morgan; two sisters-in-law, Kathy Smith, Linda (wife of Bill) Engal; one infant sister, Bonnie Mae Smith; and several aunts, uncles, and cousins. Dennis was a member of the Truth Tabernacle Church in Petersburg, IL. He also served in the Army. Dennis always enjoyed communicating with his neighbors, family, and friends. They will all miss his humming and his laugh. A funeral service will be held for Dennis at the Truth Tabernacle Church in Petersburg, IL on Thursday, October 21, 2021 at 10:00 AM. A visitation will be held one hour prior to the service from 9:00 AM to 10:00 AM. Pastor J.D. McWhorter will officiate. Burial will follow at Camp Butler National Cemetery in Springfield, IL at 12:00 Noon. Memorials may be made to the Truth Tabernacle Church. Online condolences may be left for the family at www.hurleyfh.com Hurley Funeral Home in Petersburg, IL is assisting the family with arrangements.

The family of Dennis Russell Smith created this Life Tributes page to make it easy to share your memories.

Dennis Russell Smith, 72, of Tallula, IL passed away at his home...