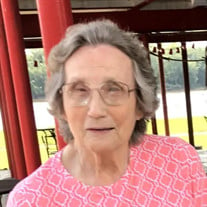 Dorothea M. Bless, 90, of Greenview, IL passed away at Memorial Medical Center in Springfield on Thursday, December 9, 2021. She was born in Menard County on March 7, 1931 to Harmon O. and Margaret H. (Marquard) Tholen. She married Frank E. Bless on January 13, 1951 in Greenview. He preceded her in death on December 27, 1997. Dorothea is survived by one son, Larry (Suzanne) Bless of Athens; four daughters, Connie (Randy) Brownfield of New Holland, Beverly (John) Burns of Greenview, Janet (Mike) Langford of Greenview, Donna (Randy) Tibbs of Easton; six grandchildren, Cole (Jazmine) Brownfield, Connor (Kristine) Brownfield, Amanda Bless, Travis (Jennifer) Bless, Laura (Brad Lemme) Tibbs and Kristina (Rob) Kern; and four great grandchildren, Karlie and Khloe Bless, Evan Lemme, and Gaige Kern. She was preceded in death by her parents; one brother, Harmon J. Tholen; and three sisters, Evelyn Hudspeth, Suzie Tholen, and Emma Winkelmann. Dorothea was a lifelong resident of the Greenview area. She was a member of the United Presbyterian Church in Greenview where she had served as a Deacon and Bereavement Chairman, member of the Greenview AmVets Ladies Auxiliary where she had served as president, secretary, treasurer, and child welfare chairman. Dorothea worked at the Greenview School District for 20 years as a cook and then a supervisor. She also worked part-time in the cafeteria an additional 13 years before retiring. She was a Cardinals Baseball fan, enjoyed bowling, crossword and jigsaw puzzles, and collected bells and denim days. A visitation will be held for Dorothea on Monday, December 13, 2021 at the United Presbyterian Church in Greenview, IL from 4:00 PM to 7:00 PM. A funeral service will also be held at the church on Tuesday, December 14 at 11:00 AM. Shane Hoerbert will officiate. Memorials may be made to the Greenview United Presbyterian Church or St. Jude Children’s Hospital. Burial will follow at Elmwood Cemetery in Greenview, IL. Online condolences may be left for the family at www.hurleyfh.com Hurley Funeral Home in Petersburg is assisting the family with arrangements.

The family of Dorothea M. Bless created this Life Tributes page to make it easy to share your memories.

Dorothea M. Bless, 90, of Greenview, IL passed away at Memorial...

Send flowers to the Bless family.