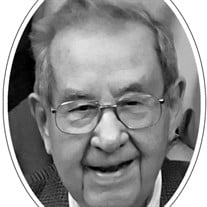 Dr. Barry Douglas Free, 95, was welcomed into heaven on April 11, 2022, surrounded by his family. He was born on March 18, 1927, in Stettler, Alberta, Canada, the son of Lena and Douglas Free. He grew up in Canada, however in high school he spent one year in Petersburg, Illinois, living with his uncle, Dr. Thomas Plews. He married Dolores Moser on August 7, 1955, and established a home in Petersburg, Illinois. He obtained his medical degree in 1952 from the University of Ottawa, Canada. Upon completing his formal education, he returned to Petersburg to assist Dr. Plews with his medical practice. With the assistance and encouragement of town leaders he established Menard Medical Center. Under his leadership the medical center grew to include a pharmacy and four physicians. Menard Medical Center continues to serve the community to this day. As much as he loved being a physician, he enjoyed being an entrepreneur. He served as a member of the board of trustees at the National Bank of Petersburg and eventually served as the chairman of that board. He became Chief of the Medical Staff at Memorial Medical Center and served on the Medical Executive Committee. He later served on the board and became the Chairman of the board of directors at Memorial Medical Center. Together with Dr. Robert Schafer, they renovated the old PORTA High School building into a health club and an apartment complex, they owned a nursing home and pharmacy in Petersburg and for a few years, they owned a herd of cattle. He and his late wife loved to travel and traveled the world with family and friends. He enjoyed collecting antiques and spent endless hours at various auction houses where they made many friends. Other past time that he enjoyed were watching Illini sports with his wife, gardening and reading. He was a longtime member of the Central Presbyterian Church in Petersburg, IL. He was preceded in death by his parents and wife. He is survived by his four children, four grandchildren and six great grandchildren. Children are Deborah (Rodney) Davis, Petersburg, Illinois; Barbara Free, Petersburg, Illinois; Cynthia (Michael) Rohman, Prosperity, SC; and Kenneth (Valerie) Free, Petersburg, Illinois. Grandchildren and great grandchildren are Ashley (James, Jillian, and Everly) Kveton, Petersburg, Illinois; Stephanie (Kyle, Hayes and Auggie) Wankel, Petersburg, Illinois; Daniel (Mary Allen and Eleanor) Rohman, Irmo, South Carolina; and Kyle (Courtney and Crawford) Rohman, Lexington, South Carolina. He would now say that, “he is floating on a cloud in heaven”. On behalf of the family, we want to thank all of the caregivers at Springfield Homes and to the many others that assisted and cared for him in any way in the last years. A Celebration of Life service will be held on Saturday, May 21, 2022, from noon to 2:00 pm at the Wankel warehouse, Petersburg. In lieu of flowers, please consider donations to the Menard County Rural Fire District or the Menard County EMS. Hurley Funeral Home in Petersburg is assisting the family with final arrangements. Please visit hurleyfh.com to leave online condolences and share memories to the family.

Dr. Barry Douglas Free, 95, was welcomed into heaven on April 11, 2022, surrounded by his family. He was born on March 18, 1927, in Stettler, Alberta, Canada, the son of Lena and Douglas Free. He grew up in Canada, however in high school he... View Obituary & Service Information

The family of Dr. Barry Douglas Free created this Life Tributes page to make it easy to share your memories.

Dr. Barry Douglas Free, 95, was welcomed into heaven on April...

Send flowers to the Free family.