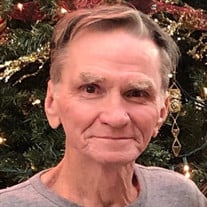 Edward “Ed” Allen Sage, 72, of Springfield, Illinois, passed away at Memorial Medical Center on July 13, 2020. He was born on March 3, 1948, the son of Paul Roswell Sage and Cleo Ruth (Brown) Sage in Willard, Ohio. He married “his bride”, Jean Baldwin, on March 23, 2001, at St. Paul’s United Church of Christ in Petersburg, Illinois. Ed served our grateful nation in two tours of the Vietnam War in the United States Army and retired from the Army National Guard in Springfield, Illinois, as a Major. He owned and operated Sage’s TV Shop in Petersburg for 27 years and enjoyed repairing televisions that he had been given only to give them to anyone who did not have one. He was a member of the VFW Post 6871 where he called Bingo games for many years. He was a very generous and kind man who had a very positive attitude. Ed is survived by his wife, Jean; four children, Mica, Matthew, Bobbi and Lori; nine grandchildren, Travis, Sean, Stormie, Sommer, Stefanie, Trishia, Loyrissa, Jonathon and Shane; four great grandchildren, Maeley, Amira, Oliver, and Lucy; and two brothers, Bill Sage and Ron Sage. Ed was preceded in death by his parents; one brother, Cicero Sage; and a grandson, Tyler. A Celebration of Life will be held on Thursday, July 23, 2020, at Hurley Funeral Home in Petersburg, Illinois, from 9:00 am to 11:00 am. A private family graveside will be held at Camp Butler National Cemetery with Pastor Ron Otto as the officiant. The Menard County Inter Veterans Ceremony Unit will perform military rites. Memorial contributions in Ed’s name may be made to the Menard County Animal Control. Cremation rites were accorded by Hurley Funeral Home in Petersburg, Illinois.

The family of Edward "Ed" Allen Sage created this Life Tributes page to make it easy to share your memories.

Send flowers to the Sage family.