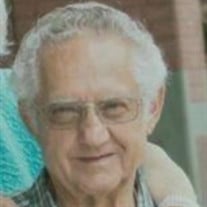 Edward E. (Mac) McDougall, 81, of Petersburg, passed away peacefully at home with his family by his side on Monday, December 27 at 7:55 a.m. He was born January 19, 1940 to Lee Earl and Florence (Keen) McDougall in Menard County. He graduated Petersburg Harris High School in 1958. He served in the United States Army and after returning to Petersburg, worked as a meat cutter before attending the Illinois State Police Academy. The highlight of his career was the opportunity to serve as a personal bodyguard for then Presidential Candidate Ronald Reagan on a campaign visit to Springfield. He served with the ISP for 25 years until retirement. He later worked part-time for the Petersburg Police Department, the Menard County Sheriff, and finished his public service career as security for the Menard County Courthouse. He married the love of his life, Jo Anne Bell, on October 8, 1959 in Petersburg and she survives. They enjoyed a long and wonderful life together and particularly relished their many excursions to Branson, Missouri. He also enjoyed classic cars, his daily walks, and Dolly Parton. In addition to his wife, he is survived by his son, James (Jimmie) McDougall, his daughter, Kathy (Mark) Schwab, three grandchildren; Bradley and Tyler (Emily) Glynn, and Chantel (Thomas) Knous, three great-grandchildren; Mackenzie and Bryce Glynn, and Kaylee Covey. His sister, Edie Harris, and many nieces and nephews. He was preceded in death by his parents, one brother, Tom McDougall, and two sisters, Marion (Mickey) Bown, and Janette Moore. Visitation is scheduled for Wednesday, December 29 from 4:00 – 7:00 p.m. at Hurley Funeral Home in Petersburg. Funeral services are scheduled for Thursday, December 30 at 10:00 a.m. at St. Paul’s Evangelical Free Church also in Petersburg. Burial will be in Oakland Cemetery. Memorial contributions can be made to the Susan G. Komen 3 Day or Illinois State Police Benevolent Fund.

Edward E. (Mac) McDougall, 81, of Petersburg, passed away peacefully at home with his family by his side on Monday, December 27 at 7:55 a.m. He was born January 19, 1940 to Lee Earl and Florence (Keen) McDougall in Menard County. He graduated... View Obituary & Service Information

The family of Edward Earl McDougall created this Life Tributes page to make it easy to share your memories.

Send flowers to the McDougall family.