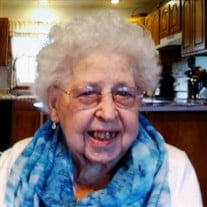 It pleased the Lord to call home the soul of his obedient servant Esther Roslyn Anderson Fricke on September 24, 2021. Esther entered this world in the countryside of Chandlerville, IL on December 7, 1927 to the parents of Virgie Lena (McHenry) Anderson and Roscoe “Jack” Phineas Anderson. She was the 7th child out of 10 children. There are three siblings still living. Mildred Lucille (Anderson) Lutes, Mary Roberta (Anderson) Stroh, Randal Paul Anderson, Gerald (Andy) Anderson (living), Virginia (Anderson) Winklemann (living), Phyllis (Anderson) Leinberger, Eugene Anderson, Robert Anderson (living), and Roscoe (Art) Anderson. Esther married Gilbert Fricke on June 25, 1948 and Gib was called home by the Lord on August 17, 1982. Immediate family still in this world are Daniel Fricke, grandson Jacob Fricke, Rhonda Davis, grandchildren Korrie (Breanne) Davis, Nina (Bo) Lowder, great grandson Declan Walsh, and Richard (Diana) Younkers, grandchildren David, Christina and Darin (Jennifer), great grandchildren Ayden and Colleen Younkers. Esther graduated from Petersburg Harris Consolidated High School in 1945 and went to work upon graduating for the Schirding Bank and then the National Bank. During this time period, Esther also became a team member of the semi-professional basketball team the famous Oakford Farmerettes Team (which began as the Oakford Indees). Her sister Phyllis was also on the team and after returning home from WWII, their coach and booking agent was their older brother, Andy Anderson. The Oakford Farmerettes traveled the country racking up win after win and won the Illinois State Championship every year they were in existence. When Esther married Gib in 1948, she decided to hang up her working skirts and basketball tennis shoes and became partners with Gib in farming. They started their family in 1961 with the addition of Richard and went on to have son Daniel and daughter Rhonda and settle into family farming. Esther lived her life to be a farming partner, mother and to serve, and she served in several capacities while having a wonderful life. Esther loved the Lord and was a member of the Bethlehem Lutheran Church since 1948. She served in the Ladies Aid as President, Treasurer, Secretary and Program Chairman over the course of several years. Esther was the Treasurer of the Community Thrift Shop for over 20 years, President of the Menard County Homemakers Extension Council for over 5 years, 4-H Leader of Sandridge 4-H club for over 5 years, served on the Menard County United Way Board for over 4 years and was a member of Menard County Fair Women’s Program Committee for over 20 years. One of Esther’s favorite pastimes was golfing. She was an avid golfer until her stroke in 2004. She was a member of Shambolee Gold Club Board for two terms and the Womens Golf Association President for two years. Her other passion was supporting the Republican Party. Esther was elected to the Republican Central Committee in 1983 and became Chairman from 1989 to 2006. She was also employed by the Republican Senate Staff from 1994-2004 as their main telephone operator, and had the opportunity to serve on the Citizens Committee for George W. Bush Campaign in 1988. When Esther wasn’t busy with politics, she enjoyed her very large Anderson family playing cards and attending every event and pot luck she could. She also enjoyed attending her grandchildren’s multiple activities as they were growing, in college and sporting events beyond college. In her later years, her great grandchild Declan brought much joy to her life. Hurley Funeral Home in Petersburg is assisting Esther’s family with her final arrangements. Please visit hurleyfh.com to see her online obituary, leave condolences and share memories with her family. A graveside service will be held on Tuesday, September 28, 2021, at 11 am with Pastor Jeffrey Gross officiating. Esther is being laid to rest next to her husband at Rose Hill Cemetery in Petersburg, Illinois. Esther was very grateful for all those Earthly Angels that helped her in her later years in life when she could no longer do things for herself. Memorial contributions may be made to the Bethlehem Lutheran Church of Petersburg.

It pleased the Lord to call home the soul of his obedient servant Esther Roslyn Anderson Fricke on September 24, 2021. Esther entered this world in the countryside of Chandlerville, IL on December 7, 1927 to the parents of Virgie Lena (McHenry)... View Obituary & Service Information

The family of Esther Roselynn Fricke created this Life Tributes page to make it easy to share your memories.

It pleased the Lord to call home the soul of his obedient servant...

Send flowers to the Fricke family.