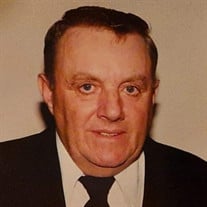 Eugene Glen “Huey” Eilers, 79, passed away at Passavant Area Hospital on Friday, February 12, 2021 at 3:58 p.m. with his loving family by his side. He was born on April 14, 1941 in rural Chandlerville to Glen Irving and Hester (Chilton) Eilers. He married Mary Ann Griffie on July 21, 1962 at Bethel Baptist Church at rural Chandlerville and she survives. Eugene is survived by his wife of 58 years, two children, Lori Eilers (Matt Shipley) of Jacksonville and Bradley (Christy) Eilers of rural Chandlerville, four grandchildren, Kyson, Jaelyn, Landon, and Mariah Eilers, one brother, Harold Eilers of Chandlerville, one sister Mary Ann Eddings of Jacksonville, sister-in-law, Donna Darlene Griffie of rural Chandlerville, and several nieces and nephews. He was preceded in death by his parents and infant sister, Sharon. Eugene graduated from Chandlerville High School in 1959. He was saved and baptized when he was younger and was a member of Bethel Baptist Church of rural Chandlerville. He was a lifelong farmer. He never knew a stranger, he could strike up a conversation with anybody. He had an accident, a tree fell on him in 1980 before his 39th birthday and was paralyzed from the waist down and in a wheel chair, but that never stopped him from doing what he wanted to do. He still worked on the farm and was a hard worker. He was an avid sports fan-Chicago Bears, Bulls, and Cubs fan. He liked playing horseshoes, cards, and being at his dirt bike track, also going to all his grandkids sporting events. He loved his family and his family loved him with all their heart. He is going to be sadly missed. A visitation will be held on Thursday, February 18, 2021 from 5:00 p.m. to 7:00 p.m. at Lintner-Hurley Funeral Home in Chandlerville. Funeral services will be held on Friday, February 19, 2021 at 11:00 a.m. at Bethel Baptist Church outside of Chandlerville. Burial will follow the service at Bethel Cemetery. Memorial donations may be made in Eugene’s name to Bethel Baptist Church or Panther Creek New Beginnings Church. Online condolences can be left for his family at www.hurleyfh.com. Due to IDPH regulations, masks will be required at all times during the visitation and service and we will be limited to 50 people in the funeral home at any given time. Lintner-Hurley Funeral Home in Chandlerville is in charge of arrangements.

The family of Eugene "Huey" Eilers created this Life Tributes page to make it easy to share your memories.

Send flowers to the Eilers family.