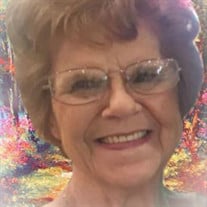 Eva Fae Flaharty, 86, of Havana, passed away at her home at 1:16 p.m., on Sunday, September 20, 2020. She was born August 24, 1934, in Mason County, Illinois, to Charles and Clara (Vance) Petty. She met the love of her life in 1950 and what a love it was. Donald(Jack )Flaharty (dad) knew she was his girl the minute he laid eyes on her. He swept her off her feet in a few short months later, married her on October 11, 1950, Lewistown, IL, and they resided in Havana. He preceded her in death on March 9, 2011. Mrs. Flaharty is survived by three children: Martha Williams of Canton, Anita (Gregory) Wilcoxen of Havana and Marla (Jerry) Bloyd of Havana; twelve grandchildren; seventeen great-grandchildren; one brother, Dean Petty of Havana; and one sister, Marilyn Petty of Tucson, Arizona. She was preceded in death by her parents, husband, seven siblings and one son, Danny Flaharty. Eva worked at Borden Dairy Company as a demonstrator. She was a secretary, owner in the freight business for over forty years, owner of, Thede Bros. and K&K Truck line. She was also a member of the Red Hat Society. Funeral services will be held at Noon at Hurley Funeral Home in Havana, on Friday, September 25, 2020, with visitation one hour prior to the services. Rev. Abraham Mogerman will officiate. Burial will follow the services at Fairview Cemetery, near Chandlerville. Memorial contributions may be made to American Cancer Society. Online memorial messages may be left for the family at www.hurleyfh.com. Hurley Funeral Home in Havana is in charge of arrangements.

The family of Eva Fae Flaharty created this Life Tributes page to make it easy to share your memories.

Send flowers to the Flaharty family.