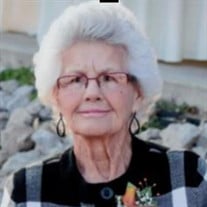 Evelyn Marlene Marcum, 81, of Greenview passed away on Monday, October 26, 2020 at 6:15 PM at Memorial Medical Center in Springfield, IL. She was born on October 5, 1939 in Greenview, IL the daughter of Franklin Elmer and Stella Bernice (Altig) Despain. She married Wesley Edward Marcum in Greenview, IL on June 18, 1955. He preceded her in death on September 13, 2012. Evelyn is survived by two sons, Ken (Karen) Marcum of Greenview, Marty (Myra) Marcum of Florida; seven grandchildren, Kara (Mel) Lawyer of Taylorville, Jason Marcum of North Carolina, Amy (Jason Heriford) Schultz of Greenview, Katie (Jake) Lynn of Mason City, Kelsey (Sterling) Adams of Greenview, Brooke (Sean) Cappiello, and Brandon (Danielle) Marcum both of Florida; one brother, Jim (Gloria) Despain of Florida; and 16 great grandchildren, Tanner, Lucas, Wyatt, Mariah, Lacie, Jacob, Johnathan, Sawyer, Emily, Walker, Briggs, Kolton, Noah, Alex, Madison, and Rocco; one niece; and several nephews. She was preceded in death by her parents, one sister, Shirley Underwood, and one granddaughter, Melissa Marcum. Evelyn attended the Greenview United Church. She worked as a Branch Manager for the Middletown State Bank in Greenview for many years before retiring and working her last day on June 30, 2020. She was a hard worker all of her life and never went without a job. Evelyn enjoyed spending time with her family, especially her children, grandchildren, and great grandchildren. According to her wishes, cremation rites have been accorded. A graveside service for Evelyn will be held at Elmwood Cemetery in Greenview at a later date. Memorials may be made to the Greenview United Church. Online condolences may be left for the family at www.hurleyfh.com. Hurley Funeral Home in Petersburg is assisting the family with arrangements.

Evelyn Marlene Marcum, 81, of Greenview passed away on Monday, October 26, 2020 at 6:15 PM at Memorial Medical Center in Springfield, IL. She was born on October 5, 1939 in Greenview, IL the daughter of Franklin Elmer and Stella Bernice (Altig)... View Obituary & Service Information

The family of Evelyn M. Marcum created this Life Tributes page to make it easy to share your memories.

Evelyn Marlene Marcum, 81, of Greenview passed away on Monday,...

Send flowers to the Marcum family.