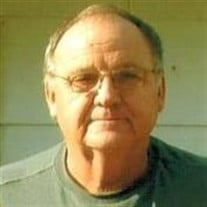 Gary Lynn “Tiny” Espenschied, 77, of Tallula, IL died on Thursday, June 2, 2022 at Memorial Medical Center in Springfield. He was born on March 2, 1945 in Highland, IL, the son of Virgil “Tiny” and Mildred (Sapp) Espenschied. Gary married Patricia Adcock on April 2, 1966 in Petersburg. Gary graduated from Freeburg, IL High School in 1963 and attended Centenary College in Shreveport LA for 2 years on a full basketball scholarship. He returned to central Illinois to work and assist his family, where he met and married the love of his life. They moved to Tallula in 1966, where they spent the rest of his life raising a family and starting his own trucking business in 1987. He served in the Illinois National Guard, served as a trustee on the Village of Tallula Board from 2009 to 2013, and served as Village President from 1993 to 2020. Gary was preceded in death by his father, mother, an infant brother, Robert, and his sister, Nina Marie Fulscher. He is survived by his wife, Pat; daughter, Karen; and son, Greg, all of Tallula; grandsons, Joshua (Rachel) Espenschied of Petersburg, Kolby (Brandy) Espenschied of Belleville; great grandsons, James and Ian of Petersburg; brother, David (Lynn) Espenschied of Tallula; sister, Mary (Wayne) Wolford of McMinnville, TN; and many nieces and nephews. Cremation rites have been accorded by Hurley Funeral Home in Petersburg. A private family burial will be held at White Cemetery in Tallula with a gathering at the Tallula Community Center where friends may visit on Wednesday, June 8, 2022 at 12:00 noon. In lieu of flowers, donations may be made to the Tallula BLS, Tallula Senior Citizens, or a charity of choice.

The family of Gary Lynn "Tiny" Espenschied created this Life Tributes page to make it easy to share your memories.

Send flowers to the Espenschied family.