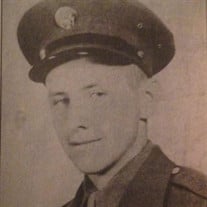 George Richard Conway, 97, of Bath, passed away at his home at 8:00 p.m., on Tuesday, March 1, 2022. He was born October 30, 1924, in Bath, to John and Ivy (Barndollar) Conway. He married Jody Lynn in 1954. While they later divorced, they remained friends. He later married Rosalyn Vehslage on July 4, 1992. She preceded him in death on July 17, 2019. Mr. Conway is survived by three children: Kevin (Gloria) Conway, of Havana, Kim (Michael) Whitehead, of Bath, and Mitch Conway, of California; as well as six grandchildren, ten great-grandchildren, and one great-great grandchild. He was preceded in death by his parents, wife, grandson Blake Whitehead, and three siblings: John Conway, Leo Conway and Mabel Chenoweth. Mr. Conway was a member of St. Paul’s Lutheran Church in Havana. He served in the US Army during WWII and was taken as a POW. He was a member of VFW Post #6408 in Havana. He worked as an Operating Engineer with Local #649 – Peoria, for forty years, retiring in 1990. Funeral services will be held at St. John’s Lutheran Church, near Bath, on Saturday, March 5, 2022 at 11:00 a.m., with visitation one hour prior to the services. Burial will follow the services at Bath Cemetery. Rev. Brian Lesemann will officiate. Memorial contributions may be made to the Conway Family to be used for a community project in Bath. Online memorial messages may be left for the family at www.hurleyfh.com. Hurley Funeral Home in Havana is in charge of arrangements.

The family of George Richard Conway created this Life Tributes page to make it easy to share your memories.

George Richard Conway, 97, of Bath, passed away at his home at...

Send flowers to the Conway family.