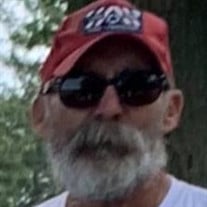 Gerald Wayne “Mud” Allen, 66, of Petersburg passed away on Wednesday, January 13, 2021 at Memorial Medical Center. He was born on September 13, 1954 to Gerald “Jack” and Evelyn (Stufflebeam) Allen. Mud married Paula “Pi” Gansbauer on May 25, 2002. He is survived by his wife Pi and son John Wayne “Jack” Allen of Petersburg, two sisters Brenda Thurman of Auburn, Catherine Muller of Tallula and several nieces & nephews. He was preceded in death by his parents and brothers-in-law Jim Thurman and Bob Muller. Mud grew up working on his family’s farm and resided there until his death. He was a life-long truck driver working for Boesdorfer Trucking, Oasis Farms and Brauer Pork before becoming the owner-operator of Mud Trucking. Mud also baled his own hay each summer along with doing custom baling. Mud was a member of American Harley Express M.C. for 30 years and served as Vice-President for several years. He rode many, many miles, mostly in the western states, and attended Sturgis and Daytona Bike rallies. He was especially proud to join other motorcyclists from across the nation on the annual ride to attend honorary ceremonies at Viet Nam Veterans Memorials in many states on the way to the Viet Nam Veterans Memorial ceremony in Washington D.C. He participated annually in the Illinois Viet Nam Memorial Vigil for 30 years. Mud enjoyed attending and "pitting" at top fuel Harley drag races for his good friend Ray of Tampa, Florida. He enjoyed pulling at the Menard County Fair tractor pulls on his IH806 - especially if the competition was Green. He also served on the Menard County Fair Tractor Pull Committee. Mud watched every John Wayne movie made - multiple times. He will be remembered for always being among the first to help his friends and neighbors. A celebration of life will be held at a later date. Cremation was provided by Hurley Funeral Home, 122 W Douglas, Petersburg, IL 62675. Cards of condolence for the family can be sent to Hurley Funeral Home.

The family of Gerald Wayne "Mud" Allen created this Life Tributes page to make it easy to share your memories.

Gerald Wayne “Mud” Allen, 66, of Petersburg passed away on Wednesday,...

Send flowers to the Allen family.