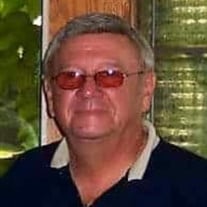 Harold William “Bill” Heaver, 82, of Sebring, Florida, formerly of Havana, passed away at AdventHealth Sebring at 10:21 p.m., on Tuesday, October 13, 2020. He was born February 4, 1938, in Havana, Illinois, to Harold T. and Eleanor (Kelly) Heaver. He married Gloria France on June 16, 1956, and she preceded him in death on August 30, 2004. He later married Joyce Homer and she survives. Mr. Heaver is survived by his wife, Joyce, of Sebring, Florida; four children: Debbie Lulay of North Ft. Meyer’s, FL, Kathleen (John) Hendricks of Jacksonville, IL, Robin (Gary) House, of Bath, IL and William (Janice) Heaver of Pekin, IL; and step-children: Lynn Oswald and Sara Malantonion. Also surviving are five grandchildren: Jeremy, Trisha, Josh, Austin, and Tanner, as well as six great-grandchildren and two great-great-grandchildren. He was preceded in death by his parents, wife, Gloria, one sister, Betty, one half-brother, Tracy and granddaughter, Heather. Mr. Heaver was an active member of Havana Church of Christ for many years. He was an active member of the Moose, Sons of American Legion, The Elks, and was an active member of Heartland Church of Christ in Sebring. He loved dancing and his dog Billy. He also owned Heaver and Son Painting while working at International Harvester. After retiring from International he was co-owner of Tri-County Sandblasting and Painting. Bill was dedicated to providing for his family and was a very hard worker all of his life. Funeral services will be held at Hurley Funeral Home in Havana, at 11:00 a.m., on Saturday, October 24, 2020. Visitation will be held one hour prior to the funeral. Pastor Bill Boyce will officiate. Burial will follow at Laurel Hill Cemetery in Havana. A luncheon will follow the services at VFW Post #6408 in Havana. Memorial contributions may be made to American Cancer Society. Online memorial messages may be left for the family at www.hurleyfh.com. Hurley Funeral Home in Havana is in charge of arrangements.

The family of Harold W. "Bill" Heaver created this Life Tributes page to make it easy to share your memories.

Send flowers to the Heaver family.