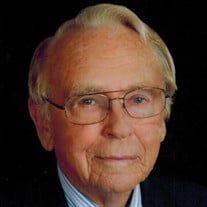 James R. Blizek, 97, of Petersburg, IL passed away on April 20, 2021 at 1:20 PM at Sunny Acres Nursing Home in Petersburg, IL. He was born on March 27, 1924 in Elgin, IL to Martin and Anne (Martin) Blizek. He was preceded in death by his first wife, Alice Pietsch in 1983. He married Thelma Juergens-Hofing on November 11, 1988 in Petersburg, IL. She survives. James is also survived by his children, Susan Lee (Eugene) Gronewald of Petersburg, IL, Robert James (Susan) Blizek of Maryland, Marcia Ann (Mike) Shields of Dawson, IL; three step children, Steve (Sherry) Hofing of Champaign, IL, Sue Ann (Randy) Smith of Pleasant Plains, IL, Barbara K. (Larry) Rogers of Evansville, IN; 12 grandchildren; 15 great grandchildren; and one great great grandchild; one great grandchild and one great great grandchild, both on the way. He was preceded in death by one daughter, Laura Marie Blizek; one grandson, John Bosie; and his siblings, Mary, Lillian, Mildred, George, and Martin. James had served in the Navy as a pilot and had later worked as a supervisor for AT&T before retiring. He was also a founding member of the Atonement Lutheran Church in Springfield, IL. James was an avid golfer who enjoyed gardening and bowling. A visitation will be held for James on Saturday, April 24, 2021 at Hurley Funeral Home in Petersburg, IL from 12:00 PM to 1:00 PM, with a memorial service immediately following at 1:00 PM. Pastor Mike Smoron will officiate. Memorials may be made to an organization of the donor’s choice. Online condolences may be left for the family at www.hurleyfh.com Hurley Funeral Home in Petersburg, IL is assisting the family with arrangements.

The family of James R. Blizek created this Life Tributes page to make it easy to share your memories.

Send flowers to the Blizek family.