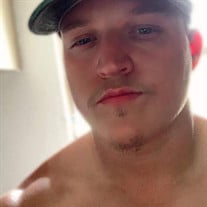 Jesse James Maberry, 24, of Kilbourne, Illinois passed away on the evening of Tuesday, August 3, 2021 after a fatal car crash 3 miles from his home. He was born on July 2, 1997 at Peoria Methodist Hospital to James Douglas Maberry and Jennifer Leanne (Kuhlman) Schoonover. He was a little fighter from the beginning, being born 7 ½ weeks early and weighing a mere 4 pounds 9 ounces and 16 ½ inches long. He was quickly loved by all the nurses caring for him. Jesse was a graduate of Havana High School on May 13, 2015 and later of Midwest Technical Institute School of Welding. He did various mechanical type jobs, side jobs mowing cemeteries, helping local farmers, pressure washing homes, and mowing and weed eating services. Jesse was an avid fisherman, boater, and enjoyed the outdoors. He had a dream of becoming a cattle farmer and moving to Missouri. Jesse was very opinionated and involved in many social groups. After a hard day at work he liked to smoke and chill. He enjoyed being the life of the party among his friends and everyone enjoyed his company. A risk taker and thrill seeker, he was popular among the ladies and they loved him too. If Jesse saw a person struggling he would always stop to help out. He was very caring and empathetic. He loved a variety of music, with country being his favorite, especially Upchurch. Jesse was preceded in death by his father, James D. Maberry, who also passed in a fatal car crash on July 31, 2005, and his beloved baby girl, Oaklynn Alice Maberry, who passed in the womb of her mother Chloe R. Chambers and was delivered on October 9, 2020. Jesse is survived by his mother, Jennifer, step-father, Benjamin Schoonover of Kilbourne, siblings: Summer (Kyle) McDaniel of Havana, David (Katie) Maberry of Havana, Marvin Benjamin Jr., and Willow Schoonover, of Kilbourne, Jimi (Sandra) Maberry of New Hampshire, Aaron Maberry of Havana, Kimi Maberry (partner Josh Presley) of Manito, step-sister Emilee Schoonover, and self-proclaimed brothers Sam Shilling, Nick Russell, and J.T. McCommic II. Jesse is also survived by his paternal grandparents, David (Patty) Kuhlman of Havana and Dessie (Wayne) Prater of Cadet, Missouri, maternal grandparents, Kenneth (Terry) Maberry of Peoria, step-grandparents, Marvin (Susie) Schoonover of Kilbourne, great-grandparents, Robert (Mary) Fawcett of Havana, and several nieces, nephews, aunts, uncles, cousins, and extended family. Graveside services will be held on Sunday, August 8, 2021 at 1:00 p.m. at Kilbourne Cemetery. Rev. Mike Hopps will officiate. Memorial donations may be made in Jesse’s name to his mother to be used for purchase of a headstone. Online condolences can be left for his family at www.hurleyfh.com. Hurley Funeral Home in Havana is in charge of arrangements.

Jesse James Maberry, 24, of Kilbourne, Illinois passed away on the evening of Tuesday, August 3, 2021 after a fatal car crash 3 miles from his home. He was born on July 2, 1997 at Peoria Methodist Hospital to James Douglas Maberry and Jennifer... View Obituary & Service Information

The family of Jesse James Maberry created this Life Tributes page to make it easy to share your memories.

Jesse James Maberry, 24, of Kilbourne, Illinois passed away on...

Send flowers to the Maberry family.