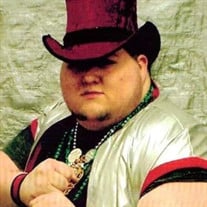 Not sure what to send?

John David Franklin Kroell a.k.a Big Pappa, 44, of Manito, Illinois, passed away on Wednesday, May 25th, 2022 at Proctor Hospital in Peoria. Big Pappa was born January 4th, 1978 to David P. Kroell and Paula M. Kroell in Pekin, Illinois. Big Pappa graduated from Midwest Central High School with dreams of becoming a professional wrestler. Big Pappa was an avid WWE & AEW wrestling fan, St. Louis Cardinals and San Francisco 49ers fan! He had creative writing skills and an incredible imagination. He spent many nights with his closest friends around a table playing Dungeon & Dragons. Big Pappa's biggest passion in life was wrestling. He has loved wrestling since he was a little boy. He trained for many years and when he became a wrestler, he was famously known as Big Pappa, The King of Mardi Gras, "Come on everybody, let's make some noise." Big Pappa wrestled for over 20 years in and around Central Illinois. He even went as far as Las Vegas, Nevada for training camps and South Carolina for wrestling shows. Big Pappa was NGW Heavyweight Champion several times and he was also Tag Team Champion as the Perfect 10. Big Pappa was inducted into the Central Illinois Professional Wrestling Hall Of Fame in 2010 alongside his Best Friend and wrestling buddy, Norman Callaway, Apocolypse. In February 2006, Big Pappa met Summer L. (Swope) Kroell in Dunlap, Illinois. She can remember what he wore when they first met; a red long sleeved shirt, dark blue jeans, sneakers, and a giant smile on his face! They used to joke about that because all Big Pappa could remember from that day was taking her on her first date to a Harry Potter movie, where he first told her he loved her, and then they went to have shakes at a local restaurant. They got married on November 3rd, 2012 in Dunlap, Illinois. Big Pappa and Summer did not have children of their own but they did have several 4 legged fur babies. Big Pappa truly loved his animals and enjoyed every moment he could to snuggle and take pictures with them. He would occasionally drape clothing, hats or put sunglasses or video game controllers around them to see what their reaction would be. He was and always will be the best daddy to his fur babies. Big Pappa was proceeded in death by two of his beloved fur babies, King Henry the Blue and Lola Bean, his grandparents, several aunts and uncles, friends, and cousins. He is survived by his loving wife, Summer L. (Swope) Kroell, two of their fur babies, Punkin Latte and Mocha Latte, both of his parents, David P. Kroell and Paula M (Bailey) Kroell, several aunts, uncles, cousins, and friends. A Celebration of Life will be held on Saturday, July 23, 2022 at Forest City Public Park from 1:00 p.m. to 5:00 p.m. Big Pappa's wife and parents would like to thank the Forman Fire Department, Forman Ambulance, Proctor Hospital ICU staff, and Methodist Hospital ICU staff for all their assistance, dedication, and hardwork, our unsung heros in the medical field. In lieu of flowers, the family requests donations be made to TAPS, Foreman Fire Department, and Foreman Ambulance. Maas-Hurley Funeral Home in Manito is in charge of arrangements.

The family of John David F. Kroell created this Life Tributes page to make it easy to share your memories.