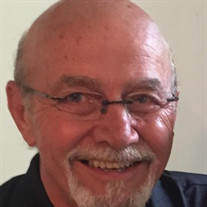 Joseph Michael “Mike” Gronewold, 73, of Petersburg, Illinois passed away April 7, 2022, at his home with his family by his side. He was born on February 5, 1949, the son of Joseph “Joe” and Mary (Jordan) Gronewold at St. John’s Hospital in Springfield, Illinois. Mike graduated from PORTA High School in Petersburg, Illinois, and then attended Canton Jr. College before joining the United States Air Force where he volunteered to serve in Vietnam. After his honorable discharge from the service, he started a career at the U.S. Postal Service in Petersburg. Shortly after, he married his high school sweetheart, Patricia Sullivan, on January 5, 1974. Mike is survived by his wife Patricia; his six children, Josh (Brooke) Gronewold, Danielle (Ryan) Honn, Jake (Tiffany) Gronewold, Tessa (Jeff) Croxton, Cassie (Tom) Bennett, and Elle Gronewold; 16 grandchildren, Haven, Nyah, Alayna, Justin, Gage, Gavin, Owen, Lia, Nora, Bailey, Addy, Hailey, Hannah, Kylee, Karlee, Emily; and his sister, Judy (Richard) Brown. Mike was preceded in death by his parents and grandparents. A visitation will be held on Friday, April 22, 2022, from 9 am to 11 am at St. Peter’s Catholic Church in Petersburg. A funeral mass will immediately follow at 11 am with Father Maurice Yonta officiating. Burial will take place at Calvary Cemetery in Petersburg following the service. Immediately following the funeral, Mike’s family hopes that you will join them for a meal and sharing memories at Wankel’s, 18239 Kelly Street, Petersburg, Illinois. Memorial contributions may be made to St. Peter’s Catholic Church or to the American Cancer Society.

The family of Joseph Michael Gronewold created this Life Tributes page to make it easy to share your memories.

Send flowers to the Gronewold family.