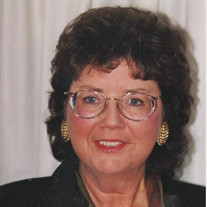 Karen Christine Dings, 73, of Havana passed away on Friday, April 16, 2021 at 5:32 p.m. at her home. She was born on March 15, 1948 in LaHarpe, Illinois to Harvey Edward and Helen Christine (Smock) Carle. She married Jackie Lee Murphy on May 20, 1966 in Marietta, Illinois. She later married Minton Phelps Dings on September 13, 2008 in Canton, Illinois. Karen was the mother to Ronald Eric (Deanna) Murphy of Havana, Richard Matthew Murphy, Jeremy Dings of LaCross, Wisconsin, Justin (Angel) Dings of Canton, and over one hundred foster children she welcomed to her home. She is also survived by her mother, sisters, Joanne (J.D.) Shipman of Webster, Elaine Root of Colchester, and Lou Ann (Joe) Pence of Carthage, brothers, Jerry (Cathy) Carle of Gresham, Oregon, and Donnie (Candy) Carle of Nauvoo. Also surviving are two grandchildren, Trey Murphy and Tayler (Kirk) Pellhum and many nieces, nephews, and other extended family. She was preceded in death by her father and one brother, Edward Carle. Karen was a 1966 graduate of Cuba High School in Cuba, Illinois. She worked for Timex in Abilene, Texas, Cress Enterprises in Brimfield, and Mason District Hospital in Havana. She enjoyed gardening, baking, and spending time with family, but what gave her the greatest joy was bringing a smile to someone’s face. She often baked cookies or treats and randomly surprised lucky recipients. Karen also liked crocheting stocking caps and donating them to young people in need. She didn’t judge one’s imperfections, their past, their frailties, or their economic status, but instead loved everyone equally without limits. The family will hold a private graveside ceremony. Per her wishes, a Celebration of Life will be planned in the future when social gatherings are considered safe for all attending. Memorial donations may be made in Karen’s name to Illinois Cancer Care or St. Jude Children’s Hospital. Online condolences can be left for the family at www.hurleyfh.com. Hurley Funeral Home in Havana is in charge of arrangements.

Karen Christine Dings, 73, of Havana passed away on Friday, April 16, 2021 at 5:32 p.m. at her home. She was born on March 15, 1948 in LaHarpe, Illinois to Harvey Edward and Helen Christine (Smock) Carle. She married Jackie Lee Murphy on May... View Obituary & Service Information

The family of Karen C. Dings created this Life Tributes page to make it easy to share your memories.

Karen Christine Dings, 73, of Havana passed away on Friday, April...

Send flowers to the Dings family.