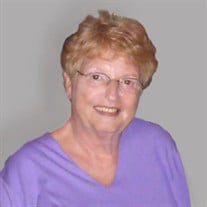 Karlene Kay Rosenstein, 83, of Country Club Hills, Illinois, formerly of Mason City Illinois, passed away on Thursday, January 21, 2021 in Hanover, Maryland in the care of Chong and Mark Rosenstein. She was born on January 30, 1937 in Lincoln, Illinois to Carl Dennis and Marian Donavan Tomlin. Karlene was a Registered Nurse for more than 30 years. While gaining nursing experience she met Stephen Rosenstein during her service in the United States Army Women’s Auxiliary Corps. Kay and Steve were married on May 28, 1961 in Hampton, Virginia. Kay cherished time with her family and friends. Kay was an avid reader and bowler. She was very adventurous. She loved rollercoasters and even tandem skydiving. Her interests included: playing bridge, attending the symphony, playing golf, cooking, and traveling. Travel highlights included Alaska, Northern California, Maine, Canada (Old Quebec City), Mexico, Greece, Germany, Italy, France, and Japan. She is survived by her four children: Barry Rosenstein of Elmhurst, Illinois, Mark Rosenstein of Hanover, Maryland, Carla Cooper of Naperville, Illinois and Michael Rosenstein of North Barrington, Illinois, each of their spouses and 10 grandchildren. Karlene was preceded in death by her parents, husband and brother, Robert Tomlin. Cremation rites were accorded and a burial of ashes will take place on Friday, June 4th, 2021 at 11:00 AM for both Stephen and Karlene at the Mason City Cemetery. Rabbi Datz will officiate. Immediately following the service, the family would like to invite everyone to join them for a luncheon at the American Legion Hall located at 110 West Court Street, Mason City, IL 62664.

Karlene Kay Rosenstein, 83, of Country Club Hills, Illinois, formerly of Mason City Illinois, passed away on Thursday, January 21, 2021 in Hanover, Maryland in the care of Chong and Mark Rosenstein. She was born on January 30, 1937 in Lincoln,... View Obituary & Service Information

The family of Karlene Kay Rosenstein created this Life Tributes page to make it easy to share your memories.

Send flowers to the Rosenstein family.