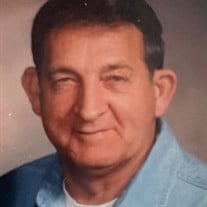 Larry “Buck” Kenneth Pierson, 82, of Havana, passed away on Thursday, May 26, 2022, at 7:37 p.m., at his home, surrounded by loved ones. He was born August 14, 1939, in Havana, Illinois, to Calvin and Mabel (Taylor) Pierson. He married Clara “Ruth” Wilcoxen on July 4, 1963. She survives. Buck is survived by his wife, Ruth, of Havana; one daughter, Beckie (Allen Johnson) Beaird, of Lewistown; two sons: Robby (Chrissy West) Pierson of Havana, and Mark Pierson, of Lewistown; two step-sons: Billy (Laura) Welbourne of Pekin and Rich Welbourne of Port Charlotte, Florida; four grandchildren: Dustin Pierson of Havana, Robby Pierson of Arkansas, Delaney (Dylan) Beach of Lewistown, and Sydney Beaird of St. David; three great-grandchildren: Alec Pierson, of Havana, Marley Pierson of Oakford, and Henry Pierson of Arkansas; as well as twelve step-grandchildren: Gina, Amber, Melvin, Billy, Chris, Jay, Matt, Christopher and Misty Welbourne and Joshua, Kira and Junior West; several step-great-grandchildren and many loving nieces and nephews. Also surviving are sister, Loretta Hurt of Havana and brother, Donny Lippert of Morton. He was preceded in death by his parents, seven siblings: Wilbur Pierson, Shirley Kelly, Colleen Otto, Sharon Richardson, Dixie Watkins, and Butch Lippert; two step-sons: Melvin Welbourne and Lloyd Welbourne; and one great-granddaughter, Allena Ruth Pierson. Buck was known as a hard worker his whole life. Most of his career was spent in service to others. He had his own taxi service and car wash. He also worked at Du-Rite Laundry in Havana. He worked for the fire department, ambulance service and local police departments before retiring from the Mason County Sheriff’s Department. In retirement, he went back to work as Kilbourne Chief of Police. In addition to these jobs, he served as Alderman for the City of Havana for several terms and later became Mayor of the City. Buck was an outstanding person at his jobs and was loved by many in the community. Buck enjoyed traveling to many attractions throughout the United States, including Nashville, Graceland, Florida and many others. He enjoyed Lucky Strikes, Pepsi, playing cards, casinos, gardening his immaculate yard and watching NASCAR. He loved being outside and soaking up the sun, especially if he could be near the ocean. Most of all he loved spending time with his family. There are many cherished stories and memories of Buck that could be shared. A celebration of Life will be held on Sunday, June 26, 2022 at 1:00 PM at the VFW Post #6408 in Havana, 415 W. Adams St, Havana, Illinois 62644. Memorial contributions may be made to St. Jude’s Children’s Hospital. Online memorial messages may be left for the family at www. hurleyfh.com. Hurley Funeral Home in Havana is in charge of arrangements

The family of Larry “Buck” Kenneth Pierson created this Life Tributes page to make it easy to share your memories.

Larry “Buck” Kenneth Pierson, 82, of Havana, passed away on Thursday,...

Send flowers to the Pierson family.