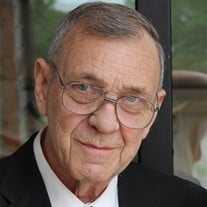 Larry W. Flowers, 80, of Pekin passed away at 10:28 a.m. at his home on Wednesday, March 3, 2021. He was born on January 21, 1941 to Raymond S. and Flossie I. (Cluney) Flowers. He married Dianne Williamson on December 27, 1970. She preceded him in death on February 18, 1993. Larry is survived by his daughter, Lori Cleaver of Pekin, step-son, Brian Flowers of Pekin, 6 grandchildren, 3 great-grandchildren, and siblings, Ronald S. Flowers of Florida, Linda Ward of Bath, and Glenn (Verda) Flowers of Texas. He was preceded in death by his parents, wife, and sister, Marlene. Larry served in the Air Force from 1959 to 1963. He worked at Caterpillar in Mapleton, Mossville, and Morton for 38 years. He was a member of UAW #974. A graveside service will be held on Saturday, March 6, 2021 at 11:00 a.m. at Laurel Hill Cemetery in Havana. Rev. Tim Lindsay will officiate. Military detail will be provided by VFW Post #6408 and American Legion Post #138. Memorial donations may be made in Larry’s name to St. Jude Children’s Hospital. Online condolences can be left for his family at www.hurleyfh.com. Hurley Funeral Home in Havana is in charge of arrangements.

The family of Larry W. Flowers created this Life Tributes page to make it easy to share your memories.

Send flowers to the Flowers family.