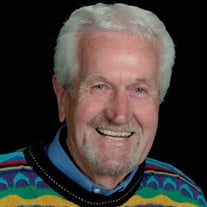 Larry Dale Shelabarger, of Oakford, passed away on Thursday, September 9, 2021, at St. John’s Hospital in Springfield. He was born on February 28, 1934, in Pekin, Illinois, to Clayton Samuel Shelabarger and Mildred Foster Shelabarger. Larry grew up in Havana, Illinois, and attended Havana High School. He served in the United States Navy, 1953 to 1957. After his discharge, he was employed at Caterpillar Inc. in East Peoria, retiring in 1988. In 1970, Larry married Deann Lutes of Oakford. They just celebrated their 51st anniversary. Larry is survived by his wife Deann; three sons, Tim (Susan) of Springfield, Tracy of Round Rock, TX, and Rod (Lilly) of Purcellville, VA; seven grandchildren, Ashley, Amy, Julie, Lacey, Richard, Terrie and Luke; two great-granddaughters, Layla and Arielle; sister, Joyce Hootman of Palatine; brother, Ed (Jenny) Edwards of Havana; and several nieces and nephews. Larry loved to go to auctions, participate in the Spoon River Drive, play golf and attend reunions of the USS Albany Assn. honoring the ship on which he served. He was also reluctant to reveal his age---do the math. A visitation will be held on Monday, September 13, 2021, from 5pm to 7pm at Hurley Funeral Home in Petersburg. Funeral service will be held on Tuesday, September 14, at 10am, at the Oakford United Methodist Church. Burial will follow at the Oakford Cemetery. Memorials may be made to the Oakford United Methodist Church. Hurley Funeral Home, in Petersburg, is assisting the family with arrangements. Please visit hurleyfh.com for Larry’s online obituary.

Larry Dale Shelabarger, of Oakford, passed away on Thursday, September 9, 2021, at St. John&#8217;s Hospital in Springfield. He was born on February 28, 1934, in Pekin, Illinois, to Clayton Samuel Shelabarger and Mildred Foster Shelabarger.... View Obituary & Service Information

The family of Larry Dale Shelabarger created this Life Tributes page to make it easy to share your memories.

Larry Dale Shelabarger, of Oakford, passed away on Thursday,...

Send flowers to the Shelabarger family.