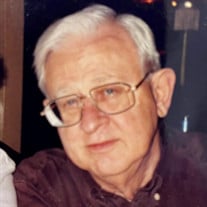 Lyman Delmos (Don) Blessman, 92, of Havana IL passed away on Monday, March 7, 2022 at Mason District Hospital. He was born November 1, 1929 in Bath IL to Lyman Henry Blessman and Mary Jane Wiseman. He married Jean Ellen Becker on June 3, 1950 in Taylorville IL. He is survived by three children, Gail K (Rex) Beard of Decatur IL, Diane E McGinnis of Havana IL, and Steven J Blessman of Havana IL, along with four grandchildren and four great-grandchildren. He was preceded in death by his wife of 70 years, Jean E Blessman, and his son Gary K Blessman. Don graduated from Havana High School in the class of 1947, and joined the United States Army serving in the Korean War in the 15th infantry unit of the 33rd Division, receiving an honorable discharge as Sergeant 1st Class . He attended Bradley University on the GI Bill studying accounting and returned to Havana to found Don Blessman, Inc. in 1957, a real estate, insurance, accounting, and home building firm which he owned and operated for nearly 50 years. Noticing trends in larger cities around Havana, it became apparent to him that the community needed someone to develop tracts of land to be used to build homes in the area. Along with the financial backing of numerous local investors he became the primary developer of a number of subdivisions including Hickory Hills, Robinia Grove, Dorchester Estates, and Sherwood Forest. Don served as a past President of the Havana Jaycees, the Optimist Club, and the State Bank of Havana Board; and was a past member of the Mason District Hospital Board. Ron Atwater, CPA, owner and operator of the Atwater Agency, became a business partner for several decades beginning in the late 60's through the 70's and 80's and was in charge of all aspects of the accounting and tax preparation operation of the firm. Ron also mastered the use of their Caterpillar Tractor bulldozer that was used to dig basements for the 50 or more Wausau homes they built and/or sold in the area. Cremation Rites have been accorded. Don requested that there be no funeral services, and that any Memorial Donations be made to the Havana Public Library or the First United Methodist Church in Havana in his honor. Hurley Funeral Home in Havana is in charge of his arrangements.

The family of Lyman "Don" D. Blessman created this Life Tributes page to make it easy to share your memories.

Send flowers to the Blessman family.