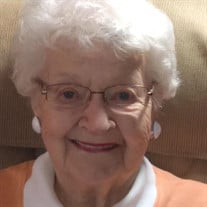 Mary Ella Allen, 100, of Petersburg passed away on Monday, December 6, 2021 at Regency Care. She was born on the family farm on Sand Ridge in Menard County on June 29, 1921, one of seven children born to William H. and Ella Richards Montgomery. She married Thomas R. Allen September 2, 1946 in Petersburg. He preceded her in death on January 6, 1977. She was also preceded in death by her sister Margaret Bergen and Brothers Paul, Howard, David and Ken Montgomery. Mary Ella graduated from Petersburg Harris High School in 1938 and attended the University of Illinois/Champaign. She was a member of the Central Presbyterian Church of Petersburg, American Legion Auxiliary, Lincoln League and Menard County Historical Society. She and Tom owned and operated Allen Lumber Co. in Petersburg until the late 1960’s. She then worked as a library aid at the Porta Elementary School and retired from the Menard County Treasurer’s Office in 1994. After Retirement she volunteered at the Porta Elementary School Library and New Salem Museum Gift Shop at New Salem State Park for over 15 years. She was a kind, loving and giving person who loved God, family and friends. She enjoyed having her great grandchildren read to her, playing bridge, reading, working crossword puzzles, talking with visitors at the New Salem and hosting her annual neighborhood Christmas Eve Party. She was the last surviving member of the original neighborhood gang on the hill in Petersburg and proud of the fact that she and her siblings continued to manage and maintain their family farm where they were all born and raised. Surviving are two sons, James (Cathy) Allen of Springfield, David (Patty) Allen of Petersburg, two granddaughters, Kari Allen (Scott Claycomb), Amy Allen of Springfield, step grandson John Wesley Virgin (Jenny) of Petersburg, two step granddaughters Kayla and Shaye Virgin of Petersburg, twin great grandchildren Wren and Kale Claycomb of Springfield, one brother Raymond Montgomery of Petersburg and several nieces and nephews. A funeral service will be held on Saturday, December 18, 2021 at 11:00 AM at the Central Presbyterian Church in Petersburg. Visitation will be held one hour prior to the service from 10:00 AM to 11:00 AM also at the church. Burial will follow at Oakland Cemetery in Petersburg. Memorial contributions may be made to the Music Department at Central Presbyterian Church. Online condolences may be left for the family at www.hurleyfh.com Hurley Funeral Home in Petersburg, IL is assisting the family with arrangements.

Mary Ella Allen, 100, of Petersburg passed away on Monday, December 6, 2021 at Regency Care. She was born on the family farm on Sand Ridge in Menard County on June 29, 1921, one of seven children born to William H. and Ella Richards Montgomery. She... View Obituary & Service Information

The family of Mary Ella Allen created this Life Tributes page to make it easy to share your memories.

Mary Ella Allen, 100, of Petersburg passed away on Monday, December...

Send flowers to the Allen family.