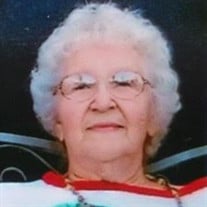 Mary Schmidt, 92, of Havana passed away on Tuesday, March 29, 2022 at 12:55 p.m. at Abraham Lincoln Memorial Hospital in Lincoln, Illinois. She was born on January 1, 1930 in Fulton County, Illinois to Ancil and Margaret (Leonard) Blodgett. She married Wilburn “Cap” Schmidt in Lewistown, Illinois on August 26, 1946. He preceded her in death on February 27, 1994. Mrs. Schmidt is survived by two daughters: Helen (Dominic) Dalpoas of Lincoln, Illinois and Carol Schmidt (Sue Sutherland) of Havana, two sons: David (Cheryl) Schmidt of Lyle, Washington and Richard Schmidt of Havana, seven grandchildren, and eighteen great-grandchildren. Also surviving are her sister, Margaret Bassette of Pekin, Illinois and several nieces and nephews. She was preceded in death by her husband, parents, daughter: Shirley Barker, one granddaughter, three grandsons, four sisters, and four brothers. Mrs. Schmidt was a lifelong member of the First Baptist Church of Havana, Illinois and served in many positions there. She was a homemaker and enjoyed helping her husband in construction and farming. Her passion was gardening and working in her greenhouse, where she raised many vegetables and flowers for the public to buy. For 20 years, starting in the early 80’s, she was a teaching assistant at her daughter Shirley’s Big Apple Nursery School. Several summers she and her husband helped at the American Baptist Assembly Camp in Green Lake, Wisconsin, where she was in charge of the greenhouse. Most important to Mary was spending time with her family, who she loved. A private family graveside service will be held at Laurel Hill Cemetery. Casual attire is preferred. In lieu of flowers, memorial donations may be made in Mary’s name to the Green Lake Conference Center (formerly known as American Baptist Assembly Camp) at W2511 State Road 23, Green Lake, Wisconsin 54941 or to the American Red Cross. Online condolences can be left for her family at www.hurleyfh.com. Hurley Funeral Home in Havana is in charge of arrangements.

Mary Schmidt, 92, of Havana passed away on Tuesday, March 29, 2022 at 12:55 p.m. at Abraham Lincoln Memorial Hospital in Lincoln, Illinois. She was born on January 1, 1930 in Fulton County, Illinois to Ancil and Margaret (Leonard) Blodgett.... View Obituary & Service Information

The family of Mary Schmidt created this Life Tributes page to make it easy to share your memories.

Send flowers to the Schmidt family.