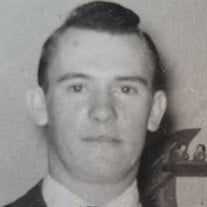 Merle Eugene McHenry, 87, of Petersburg, Illinois, passed away on Sunday, June 27, 2021, at Sunny Acres Nursing Home in Petersburg. He was born November 20, 1933, in Oakford, Illinois, the son of Frank and Irene (Dowell) McHenry. He married Glenna Gilmore in Petersburg in 1956 and she preceded him in death on April 8, 1990. Merle served our grateful nation in the United States Army from 1954 to 1956. He was of the Baptist faith. He liked to hunt, watch St. Louis Cardinals Baseball and also Chicago Bears Football. He owned Glenna’s Country Kitchen in Petersburg for five years and also owned the McHenry County Motel in Petersburg. He was self-employed as a carpenter. He will be remembered as a loving and devoted husband and father. Merle is survived by his sons, Alan (wife Heather) McHenry of Oakford, Kevin (wife Darlene) McHenry of Oakford and Tony McHenry of Quincy, Illinois; grandchildren, Abby, Wesley, J.D., and Kylie; great grandchildren, Avery, R.J., Payton, Camden, Carson and Kobi. Merle was preceded in death by his wife; his parents; his daughter, Lisa McHenry; his brother, Frank McHenry; his sister, Rosalie Winner; and a grandson, Curtis McHenry. A visitation will be held from 10 am to 11 am on Wednesday, June 30, 2021, at Hurley Funeral Home in Petersburg, Illinois. A graveside service will be held following visitation at 11:15 am at Oakland Cemetery in Petersburg with Pastor Jeffrey Gross officiating. Memorial Contributions may be made to the Alzheimer’s Association, 2309 W. White Oaks Drive, Suite E, Springfield, Illinois 62704. Hurley Funeral Home in Petersburg is assisting Merle’s family with final arrangements. Please visit hurleyfh.com to leave online condolences and share memories with his family.

Merle Eugene McHenry, 87, of Petersburg, Illinois, passed away on Sunday, June 27, 2021, at Sunny Acres Nursing Home in Petersburg. He was born November 20, 1933, in Oakford, Illinois, the son of Frank and Irene (Dowell) McHenry. He married... View Obituary & Service Information

The family of Merle Eugene McHenry created this Life Tributes page to make it easy to share your memories.

Send flowers to the McHenry family.