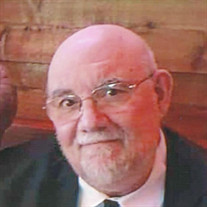 Michael John Eilers, 72, of Chandlerville, Illinois passed away on January 7, 2022 at Passavant Area Hospital in Jacksonville. He was born on August 9, 1949 in Jacksonville, Illinois to Lloyd Eilers and Marjorie (Barrette) Eilers Hobbs. He was preceded in death by his parents, two brothers, and step-dad Wolly Hobbs. Mike is survived by his wife, Betty (Long) Eilers, who he married on July 27, 1972. He is also survived by two daughters, Tabatha (pre. Mark) Marr and Amber (Myke) Bauer, seven grandchildren: Jaycee (Blair Ishmael) Fox, Trinity (Gavin) Bauer, Jocee (Drew Degroot) Harris, August Bauer, Ever Bauer, Lyric Bauer, and Bliss Bauer, great-grandson, Mackson Ishmael, seven siblings, step-mother, Imogene Eilers, and many nieces and nephews. Mike was a 1968 graduate of Chandlerville High School. He proudly served in the U.S. Army in 1969 and was deployed to Germany in 1970, where he was a post master until 1972. He loved to preach the word of God at Richland Creek Baptist Church in Pleasant Plains and Walker Nursing Home in Virginia. Mike enjoyed teaching Sunday school for youth and adults, going to the men’s breakfast on the first Saturday of every month, reading spiritual books, listening to Jimmy Swaggart, and playing rummy card games with his family. He got the chance to bless his great-grandson just 3 weeks ago and loved telling him Bible stories. In his younger years he coached pony and colt baseball in Chandlerville. He was a member of the American Legion Post #694 in Chandlerville and the VFW Men’s Auxiliary #1239 in Beardstown. He was also a member of the Jaycee’s in the 80’s and 90’s. Mike was very excited to see his Chicago Cubs finally win the World Series in 2016 and liked watching the Chicago Bears play on Sunday afternoons. He was a supervisor and manager for 40 years at meat packing plants around the mid-west. Memorial services will be held on Saturday, January 15, 2022 at Richland Creek Baptist Church in Pleasant Plains at 11:00 a.m., with a visitation one hour prior to the service. A luncheon will be served immediately following the service. Memorial donations may be made in Mike’s name to his family. Online condolences can be left for his family at www.hurleyfh.com. Lintner-Hurley Funeral Home in Chandlerville is in charge of arrangements.

The family of Michael J. Eilers created this Life Tributes page to make it easy to share your memories.

Send flowers to the Eilers family.