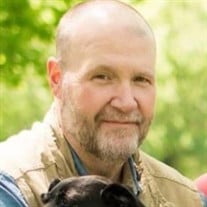 Michael “Mike” Don Hance, 54, of Tallula, Illinois, passed away on Friday, April 15, 2022, at Springfield Memorial Hospital in Springfield, Illinois. He fought a 27 month battle with complications stemming from necrotizing pancreatitis. Mike was born December 16, 1967, in Red Oak, Iowa. He married Christy Wallace, his junior high/high school sweetheart, on May, 6, 1989, in Mexico, Missouri. Mike graduated high school from Mexico High School in Missouri. He then served our grateful nation as a member of the United States Army National Guard. He was a talented craftsman, and used his woodworking skills to add warmth and character to their home, and the homes of others. He was also talented in the kitchen, and made delicious meals and desserts to bring joy to his family, even if it was something he wouldn’t dream of eating himself. He was an avid Pittsburgh Steelers football and Kansas City Royals baseball fan, and dedicated a room in his house to those interests. Mike and Christy also enjoyed dirt and track racing, and looked forward every year to their visit to the Knoxville Nationals in Iowa. He adored his dogs, Boomer and Gracie, who his family claims were his favorite children, and that Kayla was just his first child. Mike is survived by his wife, Christy; his daughter, Kayla (husband Jimmy) Kohlrus of Springfield, Illinois; and his brother, Clifford “Bud” (wife Sandy) Hance of Mattoon, Illinois. A visitation will be held on Thursday, April 21, 2022, from 4 pm to 7 pm at Hurley Funeral Home in Petersburg, Illinois. The funeral service will be held on Friday, April 22, 2022, at the Tallula Christian Church, 311 N. Yates St, Tallula, Illinois 62688, at 10 am with Bud Hance officiating. Burial will immediately follow the service at Greenwood Cemetery in Tallula. The Menard County Inter Veterans will perform military honors at the cemetery. Memorial contributions may be made to Christy Hance to help with Mike’s final expenses. Hurley Funeral Home in Petersburg is assisting Mike’s family with arrangements.

The family of Michael "Mike" Don Hance created this Life Tributes page to make it easy to share your memories.

Send flowers to the Hance family.