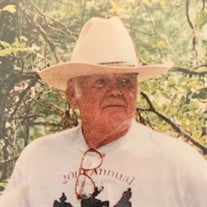 Nelson "Red" Riley, 91, of Forest City, passed away at his home at 7:54 a.m., on Sunday, March 21, 2021. He was born March 17, 1930, in Pekin, during the largest blizzard of the 1930s, to Chester and Liela (Burnham) Riley. He married Rita Bradley and had five children. In 1981, he met his life partner, Diana Null, with whom he spent 40 years. He was a life long farmer and fifty year member of Labor Local #231. He was an active member of Masonic Lodge #476 AF&AM, in Manito, where he was a 32nd degree Mason. He enjoyed family, farming, and horse back riding. He hosted a semi-annual "Red Riley Trail Ride" at Sand Ridge State Forest for 35 years. Red is preceded in death by his parents; two brothers: George and Lester Riley; two sisters: Betty Godby and Marian Halley; two children: Richard Nelson and Barbara Chasteen; and one grandson: Jason House. He is survived by three daughters: Paula (Harry) Hainline and Lonna Riley, both of Victoria, IL, and Terry (Ted) Niebrugge, of Delavan; two step-daughters: Crystal (John) OldField of Petersburg and Kelly (Jeremy) Null-Schott, of Springfield; as well as the love of his life, Diana Null. Also surviving are ten grandchildren; eleven great-grandchildren; and three-great-great-grandchildren. Anyone lucky enough to know Red Riley knows of his large personality and true love for life. Red always believed in working hard and playing harder. He will truly be missed by many. His laugh will always be something to remember. Red always enjoyed his friends and cherished his family. Visitation will be held at Maas-Hurley Funeral Home, in Manito, on Thursday, March 25, 2021, from 11:00 a.m., until 2:00 p.m. Masonic Rites will begin at 1:30 p.m. Graveside rites will be held at Forest City Cemetery, at 2:30 p.m. In accordance with current COVID guidelines, masks will be worn indoors and the funeral home will be limited to fifty guests at a time. Memorial contributions may be made to the Shriner's Hospital for Children, in Chicago. Online memorial messages may be left for the family at www.hurleyfh.com. Maas-Hurley Funeral Home in Manito is in charge of arrangements.

The family of Nelson "Red" Riley created this Life Tributes page to make it easy to share your memories.

Send flowers to the Riley family.