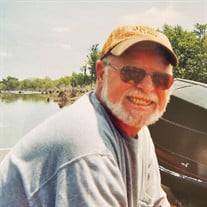 Paul Allen Hackman, 71, of Havana, passed away at Mason District Hospital, in Havana, at 9:22 a.m., on Monday, June 14, 2021. He was born September 11, 1949, in Canton, Illinois, to Dale and Mary (Burgett) Hackman. He married Janice McKinney on July 4, 1970, in Havana. She preceded him in death on May 22, 2015. Mr. Hackman is survived by two sons: Scott (Carrie) Hackman and Allen (Sheila) Robertson; four grandchildren: Brooke (Cody) Hopps, Tori (Jared) Hovey, Tab Robertson and Reid Robertson; as well as three great-grandchildren: Hensley Hopps, Jerrick Hopps and Riggins Hovey, all which Paul absolutely adored. Also surviving are his mother: Mary (Bob) Fawcett; and five siblings: Penny Smith, Terry Hackman, Peggy Robertson, Susie Schoonover, and Robert Fawcett. He was preceded in death by his father, wife, and two siblings: Janice Fawcett and Larry Hackman. Mr. Hackman was retired from Caterpillar Inc. He served in the US Army and was later a member of VFW Post #6408 Auxiliary. He was also a member of the Masonic Lodge. Paul Enjoyed deer hunting, fishing, relaxing on the Illinois River in his jon boat, his 1978 Dodge Powerwagon, but most importantly he loved his family who will miss him dearly. Cremation rites have been accorded and graveside services will be held on Friday, June 18, 2021 at 11:00 a.m., at Laurel Hill Cemetery in Havana. A luncheon will be held at VFW Post #6408, in Havana, following the services. Rev. Bill Boyce will officiate. Memorial contributions may be made to VFW Post #6408 Auxiliary. Online memorial messages may be left for the family at www.hurleyfh.com. Hurley Funeral Home in Havana is in charge of arrangements.

The family of Paul Allen Hackman created this Life Tributes page to make it easy to share your memories.

Paul Allen Hackman, 71, of Havana, passed away at Mason District...

Send flowers to the Hackman family.