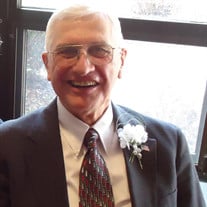 Richard Wayne Woodard, 90, of Petersburg, Illinois, passed away on Monday, November 1, 2021, at Sunny Acres Nursing Home in Petersburg. He was born September 5, 1931 to Ralph and Vera (Hudson) Woodard. He was raised on their family farm in Sidney, Illinois along with his sister, Mary Lou Woodard Reaser, who preceded him in death on April 25, 2021. He married Enola Jean Knight on December 28, 1954 in Rockford, Illinois. She preceded him in death on January 9, 1987. He later married Yvonne Hall at the Methodist Church in Sidney, Illinois. Richard graduated from Sidney High School in Champaign County in 1949. He earned a Bachelor’s Degree in Biology from the University of Illinois at Urbana-Champaign in 1955, and then earned a Master of Education from the University of Illinois in 1961. After teaching in Bement for five years, he became the principal at Athens High School. He later joined Hopcaid Fertilizer where he worked for over twenty years and eventually retired from Kifco in 1998. Richard served our grateful nation in the United States Army during the Korean War. He was a member of the Indian Point Presbyterian Church in Athens for many years before transferring to the Petersburg United Methodist Church. He was a co-owner of Heubner Tires, Inc. in Petersburg. Richard served on the PORTA School Board and as President of the Board, he had the honor of tossing the first jump ball in the new PORTA High School Gymnasium. He served as Board Chairman of the Illinois Fertilizer and Chemical Association, Inc., was a past President and member of Petersburg Kiwanis for over fifty years, and was named Petersburg First Citizen in 2012. Richard and Enola’s children are Laura (husband Kevin) Heubner of Petersburg, Kevin Woodard of Petersburg and Ann (husband Steve) Ozella of Petersburg; his grandchildren, Matt (wife Liz) Heubner, Eric (wife Cody) Heubner, Jeff (wife Natalie) Heubner, Rachel (husband Dustin) Graumenz, Amy (fiancé Jeff Schappaugh) Ozella and Dominic (wife Emily) Ozella; and seven great grandchildren, Brooke and Kyle Heubner, Mason and Regan Heubner, Nora Heubner, Declan and Aiden Graumenz and baby girl Graumenz on the way. The family wants to thank Sunny Acres Nursing Home for all of the care, love and support they provided not only to Richard, but also to his family. A visitation will be held on Thursday, November 4, 2021, from 5 pm to 7 pm at the Petersburg United Methodist Church, 221 W. Jackson St., Petersburg, Illinois 62675. A Celebration of Life will be held on Friday, November 5, 2021, at 11 am also at the church with Pastor Rick Pierce officiating. Burial will immediately follow the funeral service at Oakland Cemetery in Petersburg. Richard was a Chicago Cubs, Chicago Bears, and huge PORTA Bluejay fan. Richard was often seen wearing orange and blue in support of the University of Illinois Fighting Illini so his family encourages you to wear your Illini orange and blue to the visitation. Memorial contributions may be made to the Petersburg United Methodist Church Memorial Fund or PORTA Foundation. Please visit hurleyfh.com for Richard’s online obituary, to share memories and leave condolences for his family. Hurley Funeral Home in Petersburg is assisting his family with final arrangements.

Richard Wayne Woodard, 90, of Petersburg, Illinois, passed away on Monday, November 1, 2021, at Sunny Acres Nursing Home in Petersburg. He was born September 5, 1931 to Ralph and Vera (Hudson) Woodard. He was raised on their family farm in... View Obituary & Service Information

The family of Richard Wayne Woodard created this Life Tributes page to make it easy to share your memories.

Send flowers to the Woodard family.