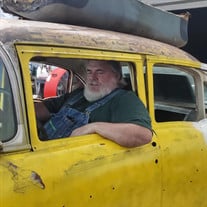 Robert Wayne Baugh, 55, of South Pekin passed away on Thursday, November 25, 2021 at 11:43 p.m. at Pekin Hospital. He was born on January 5, 1966 in Paragould, Arkansas to Bobby and Janie (Poe) Baugh. He married Joyce Sonderman on March 24, 1984 in North Pekin. Robert is survived by his wife, Joyce, of South Pekin, daughter, Sarah (James) Chaney of South Pekin, sons: Ethan (Crystal) Baugh of South Pekin, Max (Kelly) Baugh of Pekin, and Baron Baugh of South Pekin, five grandchildren, mother, Janie Baugh of Pekin, sister, Misty Baugh of East Peoria, and brothers: Kenneth (Catherine) Baugh of Manito, Roger (Connie) Baugh of Manito, and Jeffrey Baugh of Pekin. He was preceded in death by his father. Robert was such an amazing man and everyone that had ever met him knew that from the start. He was always there for family. No matter what the problem or issue they were having, he was there. He had a heart of gold and thought he could take on the world when it came to family. No matter how much he picked on you or joked around, you always knew how much that man loved you, with all of his enormous heart! He loved spending time with his grandkids. He would play silly games with them or watch whatever the grandkids wanted to watch on TV. Eventually, all the grandkids would be piled on the couch; snuggled in to him and they would all be fast asleep. The grandkids always say that they have the best Poppy ever and no one could ever sway their opinion. He enjoyed being a homebody but loved it even more when kids, grandkids, brothers, sisters, or his mother would come over to see him. He would talk for hours and at the end of the day when you realized that it was almost 1 in the morning; he'd look at you and say, "Glad you got to see me today." with a smirk on his face that you just couldn't help but laugh about. When he wasn't at home he was more that likely out at the shop with his kids or brothers. Robert was the quintessential hot rod car guy. He loved all vehicles from his 55 Chevy, classic Corvettes, AMC Javelins, old Mopar's, to new Ford pickups. He didn't care what it was as long as it had an engine in it. He loved going to car shows and explaining every detail you could think of while looking at the classic cars. He was a book of useful knowledge when it came to almost anything car related. Robert could always see the value in everything. No matter how rusty, old, or worn out; he always had huge dreams and could envision just about anything. He was truly a special person, that will be missed but will always be in our hearts. Robert served as a mechanic in the U.S. Army and worked as a materials specialist for Caterpillar. A visitation will be held on Wednesday, December 1, 2021 at Maas-Hurley Funeral Home in Manito from 5:00 p.m. to 7:00 p.m. Cremation rites have been accorded and burial will be held at a later date. Memorial donations may be made in Robert’s name to Cardinal Glennon Children’s Hospital in St. Louis. Online condolences can be left for his family at www.hurleyfh.com. Maas-Hurley Funeral Home in Manito is in charge of arrangements.

The family of Robert W. Baugh created this Life Tributes page to make it easy to share your memories.

Robert Wayne Baugh, 55, of South Pekin passed away on Thursday,...

Send flowers to the Baugh family.