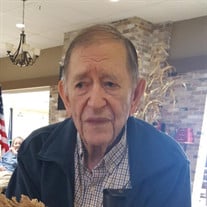 Robert R. Lynn, 96, of Kilbourne passed away on Thursday, October 8, 2020 at 2:30 a.m. at Sunny Acres Nursing Home in Petersburg. He was born on March 12, 1924 in Mason City to Addison Clair and Gladys G. (Riggins) Lynn. He married Bette J. Lynn on July 17, 1966 in Oakford. Mr. Lynn is survived by his wife, Bette, daughters: Linda (Don) Daugherty of Springfield, Jeanne (Peter) Campo of Riverton, and Nancy (Gary) Bartels of Chandlerville, grandchildren: Darrin Stufflebeam, Chad Bartels, Anthony Campo, and Laura Wilson, and several great-grandchildren. He is also survived by his siblings: Mary Lou Fehrenbacher of Champaign, Anna Mae Held of Metamora, Linda (Brooks) McDaniel of Peoria, Kenneth Lynn of Springfield, and Jim (Mary) Lynn of Easton and several nieces and nephews. He was preceded in death by his parents, grandson Kelly Stufflebeam, and brothers: Jack, Walter, Richard, Logan, and Claire. Mr. Lynn served in the U.S. Army from 1943 to 1946, and again from 1947 to 1953. He ran the Paradise Inn in Kilbourne and also farmed. He was a member of the VFW Post 6408 and the Mason City American Legion. Funeral services will be held on Monday, October 12, 2020 at noon at Hurley Funeral Home in Havana, with a visitation to be held one hour prior to the service from 11:00 a.m. to noon. Rev. Aaron Blakeley will officiate. Burial will follow the services at Oakford Cemetery in Oakford. Military detail will be provided by VFW Post #6408 and American Legion Jackson Keen Post. Memorial donations can be made in Robert’s name to Kilbourne Fire Department or Kilbourne Christian Church. Online condolences can be left for the family at www.hurleyfh.com. Hurley Funeral Home in Havana is in charge of arrangements.

The family of Robert R. Lynn created this Life Tributes page to make it easy to share your memories.

Robert R. Lynn, 96, of Kilbourne passed away on Thursday, October...

Send flowers to the Lynn family.