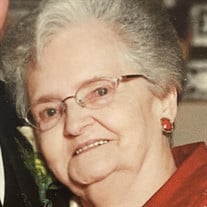 Roberta A. Ruppel, 92, died of natural causes on Monday morning, August 3, 2020 at Heritage Health in Beardstown, IL. She was born December 27, 1927 in Cass County, the daughter of Lee Roy and Elsie (Leinberger) Newman. She married Thomas H. Ruppel on March 2, 1947 and he preceded her in death on December 5, 1981. She is survived by their children: Linda Sandidge of Chandlerville, Ronald Ruppel (wife, Kathy) of Petersburg, and Allen Ruppel of Springfield; four grandchildren: Matthew Sandidge (wife, Courtney) of Chandlerville, John Sandidge (wife, Alicia) of Chandlerville, Ryan Ruppel (wife, Amanda) of Virginia, and Jessica Wilkens (husband, Matt) of Belleville; ten great grandchildren: Tucker, Paul, Loretta, Burl, Delta, and Isabelle Sandidge, Ella and Alle Ruppel, and Lily and Dean Wilkens; and one sister, Idella Ruppel of Petersburg. She was preceded in death by one sister, Ellen Jurgens, and two brothers, Virgil and Arthur (surviving wife, Bonnie) Newman and one son-in-law, David Sandidge. Roberta was a devoted homemaker and farmers wife. She spent her winters braiding rugs from strips of wool cloth and embroidering tea towels and runners. Of all the baked goods she made, her cinnamon rolls were the most outstanding. In her later years she spent many hours reading the Bible. A private family graveside service will be held Thursday, August 6, 2020 at Rose Hill Cemetery with Pastor Jeffrey Gross officiating. Memorials are suggested to Bethlehem Lutheran Church. Online condolences may be left for the family at www.hurleyfh.com Hurley Funeral Home in Petersburg, IL is assisting the family with arrangements.

The family of Roberta A. Ruppel created this Life Tributes page to make it easy to share your memories.

Roberta A. Ruppel, 92, died of natural causes on Monday morning,...

Send flowers to the Ruppel family.