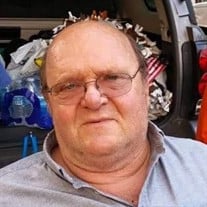 Roland Eugene Tibbs, 67, of San Jose, passed away at Pekin Hospital at 10:30 p.m. on Friday, May 22, 2020 with his family by his side. He was born August 28, 1952, in Lincoln, Illinois, to Roland F. and Lottie M. (Preston) Tibbs. He married Evelyn Skelton on February 14, 1984, in Lincoln, Illinois. She survives. Mr. Tibbs is survived by his wife, Evelyn, of San Jose; five children: Frank (Vicki) Cross, Jodi (companion - Warren) Cross, Shawna Stuff, Gina (companion - Chase) Abner, Ashley (Tyrell) Tibbs; sixteen grandchildren and one great-granddaughter. He was preceded in death by his parents. Mr. Tibbs served as sergeant in the Marines and was in a tour of the Philippines during his time served. He was manager at Firestone for more than 20 years, where he worked his way up to Master Mechanic. He was a very loving husband, father, and grandfather. He was a family man and loved spending time with his family and many friends. He served on the San Jose village board for four years and supported his community in many ways. He was a technical wiz and loved working on computers and hosting LAN parties with his friends and family, where they would spend hours playing and enjoying each other’s company. He loved fishing, boating, and shooting and collecting guns. He was a New York Yankees fan, as well as a Pink Floyd enthusiast. He upheld the true meaning of being a Marine and would give you the shirt off of his back. Cremation rites have been accorded and a Celebration of Life and military rites will be held at a later date. Memorial contribution may be made to the Tibbs family. Online memorial messages may be left for the family at www.hurleyfh.com. Hurley Funeral Home in San Jose is in charge of arrangements.

The family of Roland E. Tibbs created this Life Tributes page to make it easy to share your memories.

Send flowers to the Tibbs family.