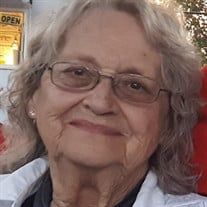 Rosemary F. Palmer 84 of Manito passed away at Pekin Manor. She was born February 14,1937 in San Jose Illinois to Fred and Thelma (Fuller) Snyder. She married Lyle W. Palmer December 24, 1980. He proceeded her in death. She was also proceeded in death by her sister Kaye Frances Snyder and her son David L. Schmick and stepson Stephen L. Palmer both of Manito. Rosemary is survived by her daughter Shelia Wright-Harmon, 2 stepdaughters, Connie Picken of Manito and Kathy Harris (The late Jon) of Pekin, and stepson Kevin Palmer also of Manito; as well as 11 grandchildren and 20 great-grandchildren. Rosemary graduated from Forman High School in 1955. She worked as a waitress at B&J restaurant in Manito, later working for Pekin Farmers auto insurance for 15 years. She was a radio announcer for WDUK in Havana. She then worked for 38 years for Pekin Farmers Grain/Rickets/Adwell/ADM. She was the Supervisor for Spring Lake Township and served on the Tazewell County board for several years. Rosemary was known as “The Potato Salad Lady” due to her catering service. She was involved with Emmanuel’s Warehouse the Manito food pantry for many years. She was an EMT for the Forman Ambulance many years ago when the service was just starting. She also served as a trustee on the Forman Fire protection District board for 24 years. She was involved in Tazewell County Home Extension and the 4-H fairs. She was a lifetime member of the Peoria Sportsmen Club in Manito serving as Secretary for many years. She served on the Prison Board Ministry for many years. She was an active member of the Immaculate Conception Catholic Church of Manito. She was an avid bowler, a die-hard Cubs fan and leaves behind her 30# cat “Baby” and her bird “Angel”. Visitation will be held on Monday, August 23, 2021 from 10:00 until 11:00 a.m., followed by Funeral Mass at 11:00 a.m., at Immaculate Conception Catholic Church, in Manito. Fr. David Whiteside and Deacon Bob Sondag will officiate. Memorial contributions may be made to Immaculate Conception Catholic Church, or Rosemary's family. Online memorial messages may be left for the family at www.hurleyfh.com. Maas-Hurley Funeral Home in Manito is in charge of arrangements.

Rosemary F. Palmer 84 of Manito passed away at Pekin Manor. She was born February 14,1937 in San Jose Illinois to Fred and Thelma (Fuller) Snyder. She married Lyle W. Palmer December 24, 1980. He proceeded her in death. She was also proceeded... View Obituary & Service Information

The family of Rosemary Palmer created this Life Tributes page to make it easy to share your memories.

Rosemary F. Palmer 84 of Manito passed away at Pekin Manor. She...

Send flowers to the Palmer family.