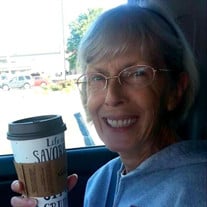 Ruth Ann (See) Wise, 76, of Springfield, Illinois, passed away at her home on Tuesday, June 9, 2020. She was born on July 22, 1943, the daughter of Raymond and Laura (Fuller) See in Des Moines, Iowa. Ruth graduated from East High School in Des Moines the class of 1962. She married Robert Wise in 1968. They were married for 25 years before divorcing but remained good friends until his death in 2014. During her marriage, she lived in Omaha and Lincoln, Nebraska, before settling in Galesburg, Illinois. She was a stay at home mother while raising her daughter, Sarah, until she graduated from high school. She then worked at Seminary Manor, Carl Sandburg Birthplace and belonged to the Welcome Newcomers Club for many years. She moved back to Des Moines in 1997 to the home she grew up in and began working for Fabric Care Center along with spending time with her sister, Mareah. She moved back to Galesburg in 2003 to be close to her daughter and began working at the 4-L Plaza Laundry. After retiring, she moved to Springfield, Illinois, in 2014, where her daughter had moved. Ruth loved to plant flowers in her garden, cross stitching, was a food lover and also loved her coffee. Most of all, she loved spending all the time she could with her family because they meant the world to her and they will definitely miss her smile. Ruth is survived by her daughter, Sarah (husband Jamie) Sipes of Petersburg, Illinois; two grandchildren, Tyler (companion Zack) and Ariel Sipes of Petersburg; a niece, Laurie (husband Stan) Nevins and her family of Des Moines, Iowa; a nephew, Neil Weese of Des Moines; a brother in law, Larry Weese of Des Moines; her extended family, Richard Sipes, Megan Coziahr, Mathew Coziahr and Michelle and Joe Kidder; and her faithful dog companion of 17 years, Sophie. Ruth was preceded in death by her parents and her sister, Mareah Weese. Ruth’s family would like to give a special thank you to the caregiver’s that meant so much to her and took great care of her, Sharon McConnell, Elaine Tarvine and Kinze Hughes. Ruth’s family will be hosting a Celebration of Life at a later date that will be announced when the date and time is determined. Memorial contributions in Ruth’s name may be made to the Animal Protective League in Springfield, Illinois, which is an organization that was close to her heart.

Ruth Ann (See) Wise, 76, of Springfield, Illinois, passed away at her home on Tuesday, June 9, 2020. She was born on July 22, 1943, the daughter of Raymond and Laura (Fuller) See in Des Moines, Iowa. Ruth graduated from East High School... View Obituary & Service Information

The family of Ruth Ann (See) Wise created this Life Tributes page to make it easy to share your memories.