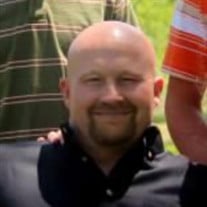 Scott D. Chalmers, 53, of Oakford, IL, passed away on Sunday, June 20, 2021, at Barnes-Jewish Hospital in St. Louis, MO, after a long battle with leukemia. He was born February 11, 1968, in Springfield, IL, to John and Linda (Kreft) Chalmers. He married Rachel S. McGinnes at Bethlehem Lutheran Church in Petersburg, IL, on May 25, 1996. Scott is survived by his wife, Rachel; two sons, Stihl and Cole Chalmers, both of Oakford, IL; his mother, Linda; and his sister, Michelle Chalmers of Antioch, IL. He was preceded in death by his grandparents, his father, John, and his brother-in-law, Scott Clendening. Scott grew up working on his family’s hog farm. He graduated from PORTA High School and attended Southern Illinois University in Carbondale, IL, until he got the opportunity to own a gym in Bloomington, IL. He returned to Oakford several years later to help his parents with the farm and worked for Brauer Pork after that. He worked for John Germeraad within the Chapter 13 Bankruptcy Trusteeship until 2018 and then worked as an individual aide at PORTA Central. Although Scott’s interests were varied, his real passions lay in sports and coaching. He coached football at PORTA High School for 25 years and coached his sons’ little league baseball team every year while they were growing up. Scott was a competitive powerlifter for much of his life and trained both of his boys in that sport, as well. He was a judge for the World Powerlifting Congress and also volunteered judging the powerlifting venue at the Special Olympics State Games for many years. Scott was an avid fan of the Chicago Cubs, the Dallas Cowboys, and Alabama Crimson Tide. Scott was a member of the Oakford United Methodist Church of Oakford, IL. Cremation rites have been accorded, and a Celebration of Life will be held at Hill Prairie Winery in Oakford on Sunday, July 18th at 12:00 noon. Memorials may be made to the Oakford United Methodist Church, the American Cancer Society, or the Foundation for Barnes-Jewish Hospital. Online condolences may be left for the family at www.hurleyfh.com Hurley Funeral Home in Petersburg, IL, is assisting the family with arrangements.

Scott D. Chalmers, 53, of Oakford, IL, passed away on Sunday, June 20, 2021, at Barnes-Jewish Hospital in St. Louis, MO, after a long battle with leukemia. He was born February 11, 1968, in Springfield, IL, to John and Linda (Kreft) Chalmers.... View Obituary & Service Information

The family of Scott D. Chalmers created this Life Tributes page to make it easy to share your memories.

Send flowers to the Chalmers family.