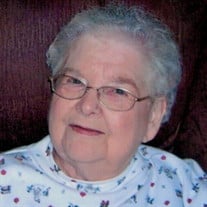 Shirley Maxine Morgan, 92, of Oakford, passed away on Tuesday, January 12, 2021, at Memorial Medical Center. She was born on January 16, 1928, in Canton, the daughter of Earl and Adah (Painter) Pratt. She married Carl “Boots” Morgan on May 31, 1947, he preceded her in death in 1989. She was also preceded in death by her parents, three brothers and three sisters. Shirley was a loving wife, mother, grandmother, great grandmother, sister, aunt and friend. She cherished spending time with her family and listening to stories of their adventures. She was well-known by many in the community for her delicious homemade candy, pies and noodles, and took joy in passing along her culinary technique and secret recipes to her children and granddaughters. She also enjoyed reading, playing cards and dice with her family, and traveling with her daughter and son-in-law. Before retiring, Shirley worked as a cook, waitress and hostess for several restaurants, including 25 years at the New Salem Lodge, where she made life-long connections with members of the community and those with whom she worked. Shirley is survived by two children, Connie (Jim) Wanless of Springfield and Carl “Bootsie” (Carmen) Morgan of Oakford; six grandchildren, Christina Morgan of Springfield, Samantha (Matt) Hayen of Williamsville, Kristi (Mike) Osmond of Springfield, Michael (Jody) Wanless of Bloomington, Tish Wanless of Springfield and Heather (Barry) Long of Mesa, AZ; one great grandchild, Ella Hayen of Williamsville; one sister, Sue Burton of Newmansville; and several nieces and nephews. A graveside service was held on Monday, January 18, 2021, at the Oakford Cemetery. In lieu of flowers, memorial contributions may be made to the Oakford Fire Department at E Center St., Oakford, IL 62673 or the Animal Protective League at 1001 Taintor Rd., Springfield, IL 62702. Hurley Funeral Home in Petersburg is assisting Shirley’s family with final arrangements. Please visit hurleyfh.com to view her obituary, leave online condolences and share memories.

The family of Shirley Maxine Morgan created this Life Tributes page to make it easy to share your memories.

Shirley Maxine Morgan, 92, of Oakford, passed away on Tuesday,...

Send flowers to the Morgan family.