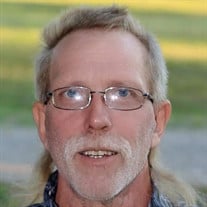 Steven Allen Simmons, 51, of Kilbourne, passed away peacefully at his home on June 5, 2021, surrounded by his family. Steven was born on May 29, 1970 in Lincoln, IL to James Nathan Evans Sr. and Crystal (Auxier) Simmons. He married Verla Marie (Witherall) Simmons on February 1st, 2006 in Lincoln, IL. Steven is survived by his wife, Verla Marie Simmons of Kilbourne, IL; mother, Crystal Lee Simmons of Jacksonville, IL; sisters, Kelly (JR) Millard of Mason City, Elizabeth Evans of Lincoln, IL and Christina (Ryan) Buffington of Decatur; brother, Nathan (Jessica) Evans of Lincoln, IL; son, Dakota Simmons; daughter, Jessica Lynn (David) Simmons; her children, Jude Coers, Xavier Logan, Liam Coers, Ziva Coers and Caroline Coers; daughter, Breanna (Brayden) Boatman; their fur babies, Chevy and Maya; daughter, Beverly (Astories) Hopping; her children, Dominic Witherall, Ciera Witherall, Eric Sheppard and Tristan Sheppard; daughter, Sarah (Jake) Hopping of Kilbourne; her children, Zaqoyia Hopping, Elizabeth Ann Michelle Hopping, Zakiah Hopping; son, Travis Hopping of Kilbourne, IL; and his fur baby Rocky; and aunts, Peggy Jo Pottorf of Mason City, Pamala Jan Auxier of Jacksonville, IL and Sarah Kay Richard of Mason City. He is preceded in death by his father, James Evans and his aunt, Rebecca Ann Coyie. Steven’s grandkids and his family were everything to him. He loved his family with every ounce of his being, and proudly let the world know of his love. Steven also cherished his co-workers at Cargill, where he worked for 13 wonderful years. He was also a volunteer firefighter, and loved being outdoors; whether he was fishing, hunting, or even mushroom foraging. Steven was also an avid fan of music and specifically, country music. He also loved motorcycles; it was Harley Davidson or nothing for him. Steven also had many humorous moments with his family. He was never one to let someone forget their moments either. Whether he was chasing baby lizards around his home and outside, watching pancake cooking turn into boiling water being lit on fire, having candy bars taken without a trace and having to do some detective work to figure out the candy bar thief, watching someone learn the hard way to not urinate on electric fences or having to endure particularly foul odors during car rides with family, Steven cherished the moments and memories he made with his family. Cremation rites have been recorded and a celebration of life with take place on Sunday June 13, 2021 at the VFW in Havana at 12:00pm. Memorial donations may be made in Steven’s name to his family. Online condolences may be left for his family at www.hurleyfh.com. Hurley Funeral Home in Havana is in charge of arrangements.

Steven Allen Simmons, 51, of Kilbourne, passed away peacefully at his home on June 5, 2021, surrounded by his family. Steven was born on May 29, 1970 in Lincoln, IL to James Nathan Evans Sr. and Crystal (Auxier) Simmons. He married Verla Marie... View Obituary & Service Information

The family of Steven Allen Simmons created this Life Tributes page to make it easy to share your memories.

Send flowers to the Simmons family.