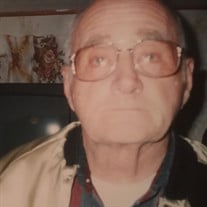 Walter Franklin Henninger, 92, of Easton, passed away at his home at 5:40 p.m. on Friday, September 17, 2021. He was born on July 15, 1929 in Havana, Illinois to Howard D. and Edith F. (Smith) Henninger. He married Carol E. Tisdale on November 18, 1947 in Easton. Mr. Henninger is survived by his four sons, Walter Dean (Janice) Henninger of Havana, Dave Henninger of Manito, Richard (Sherry) Henninger of Easton, and Darren (Susan) Henninger of Oak Creek, Wisconsin, two grandsons, one granddaughter, many step-grandchildren, and several great-grandchildren. He was preceded in death by his parents, wife, one brothers, one sister, one granddaughter, one grandson, and one daughter-in-law. Mr. Henninger was a member of St. John’s Lutheran Church of Topeka. He had served in the Army and was stationed in Korea, serving as an electrician and a cook. After serving his country, he was employed at Caterpillar in East Peoria where he worked for 33 years. He retired in 1983 from Caterpillar as a Security Guard. His hobbies included working on cars, building things, fishing, and playing penny ante poker with friends and family. Funeral services will be held on Wednesday, September 22, 2021 at 11:00 a.m. at Hurley Funeral Home in Havana, with visitation one hour prior to the services. Burial will follow at Laurel Hill Cemetery in Havana. Rev. Brian Lesemann will officiate. Military detail will be provided by VFW Post #6408 and American Legion Post #138. Memorial contributions may be made in Mr. Henninger’s name to the American Cancer Society or American Heart Association. Online memorial messages may be left for his family at www.hurleyfh.com. Special thanks to Tabitha and Pete Hilst and Vitas Hospice and staff. Hurley Funeral Home in Havana is in charge of arrangements.

The family of Walter F. Henninger created this Life Tributes page to make it easy to share your memories.

Walter Franklin Henninger, 92, of Easton, passed away at his...

Send flowers to the Henninger family.