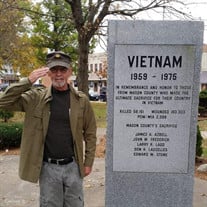 William M. “Bill” Abbott, 72, of Chandlerville, passed away at his home on Monday, February 28, 2022, with his family by his side. He was born June 12, 1949, in Springfield, Illinois, to Vertis and Marian (Shunk) Abbott. He married Marette Richardson on June 22, 1990. She survives.  Bill is also survived by his children: Shane (Carrie) Richardson and Amy Richardson; grandchildren: Chance, Keenan, Lainey and Kennedy; as well as brothers: Tom, Kenny, Richard and Paul Abbott. He was preceded in death by his parents,  one brother, James Abbott and son, Rodney Richardson. Mr. Abbott served his country from 1969 - 1971, during the Vietnam War. He was an Army Airborne Ranger (LRRP), for the First Cavalry Division 75th Infantry, H Company. He ended his military career as a sergeant, and received several service medals, including the Purple Heart for his bravery during combat. He remained a patriot his entire life.  Bill was employed by Oscar Meyer, Fornoff Fertilizer and Young Trucking Co. He later became self-employed. He was a lifetime member of the Badger Knife Club and a knife collector. He loved guns! He loved nature and especially fishing. He loved teaching his grandkids about all things outdoors.  What Bill loved most about his life, was the home he created with his wife, kids and grandkids. He will be remembered as a kind, quiet, wise man, who had a great sense of humor. His family was proud of him and will miss him forever. He was one of a kind and loved beyond measure.  Cremation rites have been accorded by Hurley Funeral Home. A private military burial for immediate family will be held at a later date. Please consider making a donation to your local VFW, of the Wounded Warrior Project in Bill’s Honor.

The family of William M. "Bill" Abbott created this Life Tributes page to make it easy to share your memories.

Send flowers to the Abbott family.